Since moving to Berlin more than a decade ago, Manchester-born pianist Julie Sassoon has forged a substantial career in Germany. She appears as solo pianist, with her quartet, and in duos such as ‘Inside Colours’ with saxophonist Lothar Ohlmeier, and also with longtime Peter Brötzmann drummer Willi Kellers.

John Fordham talked to her and found out about the background to a newly-released solo piano album on the Jazzwerkstatt label, If You Can’t Go Outside…Go Inside:

Over two decades of a jazz reporter’s all-too-brief contacts with Julie Sassoon‘s eloquent music, and an even more occasional scattering of absorbing conversations with her over those years, two impressions vividly stay in the memory – that the Manchester-born, Berlin-resident pianist and composer’s eclectic influences have long been too personally assimilated for her to fit any category other than her own; and that she isn’t remotely disposed to either hyperbole or vanity.

So when she describes, in her quietly headlong manner, a pair of solo-piano improvisations she recorded on an impulse one day in 2016 – and then forgot amid the tumult of a busy working and family life – as ‘two little jewels’, it’s safe to assume that she means it, and for emotional rather than promotional reasons, too. That assumption becomes increasingly certain as we discuss her latest release, If You Can’t Go Outside…Go Inside – the 32-minute album that shares those two pieces with the wider world for the first time. 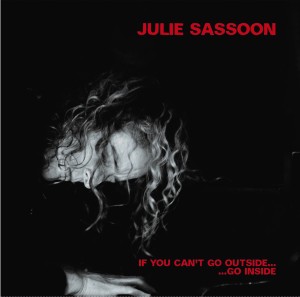 As with a good many recent releases across contemporary genres, the set’s title reflects the conflicts and challenges of the present bleak times – a unique year for the world and a disorientating standstill for performing artists that prompted Sassoon to dig out the recordings again. But this music’s energy and moods of abandoned exhilaration are light years away from the melancholy soul-searching of a musician mourning lost opportunities to go out and play.

As a piano improviser, Sassoon has always liked the anchorage of Steve Reich-like minimalist repeating loops from which to begin her capriciously roving voyages, and the two long tracks here – At The Water Tower and Murmuration – explicitly lean on that method, a beguiling device in her hands. But the telling emotional nuances scattered across the hypnotic loops of minimalism take Sassoon’s work way beyond any hint of machine-music. As the former Berlin Jazz Festival director Bert Noglik eloquently put it: ‘Watching Julie Sassoon play, one has the impression that the piano will consume her completely. From hidden depths she unearths the sounds, one by one, she threads them into chains, bundles them up into sound clusters, and lets them slide gently back into silence.’

On the line from Berlin – Julie Sassoon’s adopted home since she left London in 2008 with her musical and life partner, reeds-player Lothar Ohlmeier, and their daughter Mia – the pianist compellingly describes this music’s unexpected first appearance in her life. The date was 7 July 2016, the location the Rundfunk Berlin-Brandenburg (RBB) broadcaster’s prestigious Kulturradio Studios, a state-of-the-art establishment expertly practised at recording anything from improvisers to the Berlin Philharmonic. The date was a session for Sassoon’s regular quartet, but it turned into a startling epiphany for her.

‘We were given five days for that quartet recording, but we knew we’d only need three at the most,’ Sassoon recalls. ‘So I asked to record some solo music too – but in that environment, with its five super-qualified engineers and multiple studios and its Steinway concert grand, it felt pretty intimidating. The whole point of At The Water Tower is that its structure is just a repeating figure to improvise from, depending on the moment it can become nothing or everything. Whilst playing, I managed to reach a space where no thoughts were present, only sound and energy, total immersion in the moment. There’s no better place to be. I remember towards the end of this piece my fingers spontaneously began to move at double speed, leading me somewhere I’d never been before. I had no choice but to follow them and see where the journey would take me. There was a sense of watching and hearing myself play from another place… like unlocking the door to a limitless source of energy inside me.’

By the time Sassoon got around to the second piece, the gliding, airborne Murmuration, she had forgotten her imposing surroundings and was flying free, her playing quickly unhooking itself from the racing ostinato opening, and seamlessly evolving through startling harmonic modulations, alternations of staccato and sonorously rolling passages, dreamy reveries quietly punctuated by gleaming treble notes and deep chords, before a Jarrett-like rocking groove takes it out.

But if Sassoon instantly realised that these were precious moments in her playing life, there was little time to dwell on how or why. She had invited longtime Peter Brötzmann drummer Willi Kellers for an improv session with her at the studio the next day, followed by a live concert recording for Bayerischer Rundfunk at the Bayerische Jazz Festival with Lothar Ohlmeier of the pair’s spacious jazz/contemporary-classical ‘Inside Colours’ repertoire – a subtle conversation that had first put the pair on the new-music map in the UK, way back in the 1990s. Life moved on, and a rough mix of the solo takes gathered digital dust on Sassoon’s computer – until the pandemic came.

‘Because of what had happened at the studio, I always thought of those pieces as two little jewels I didn’t know what to do with,’ Sassoon reflects, ‘but I felt that I wanted to share them with the world somehow one day, like a small gift. Then around April 2020, after the lockdown had started, everything was starting to seem very serious, the news from Italy and elsewhere. People were live-streaming music from their bedrooms and things, but it didn’t feel like the right time to start counting your likes on Facebook. For me this time was – and still is – a time of self-reflection, and so is this music.’

At The Water Tower got its name from a remarkable piece of happenstance. In 2015, after five harmonious years in a rented Berlin flat in which she and Ohlmeier were able to freely practise and teach, and their daughter Mia to begin what would soon become a blossoming musical life at the drums, they began receiving threats of eviction from landlords who were looking for excuses to vacate the building for sale to developers. ‘From 2015, we didn’t play another note at home,’ Sassoon recalls. ‘But a friend of mine nearby lived opposite an old water tower – it looks like a lighthouse – and inside there was a small theatre, and it had a Yamaha upright piano. The owner just gave me the keys and said I could use it at any time. So that’s where I practised, and where that piece developed.’

Born and raised in Manchester, Sassoon learned classical piano and violin as a child, studied classical music and art at the University of Lancaster in the 1980s, and pursued jazz piano and Indian violin techniques as a postgraduate at Leeds College of Music. Debussy, Scriabin, Steve Reich, Egberto Gismonti and Keith Jarrett have seemed to flow into each other in her music over the years, but she has always possessed an uncanny instinct for sidestepping mimicry or cliche.

‘When I was at Leeds and I wanted to study jazz violin as well as piano,’ Sassoon remembers, ‘I was told “study violin with the Indian teacher then”. So I actually learned with the sitar teacher Dharambir Singh. When I asked him why Hariprasad Chaurasia – who was the flute player on Zakir Hussain’s Making Music, with John McLaughlin and Jan Garbarek – could touch you so incredibly deeply with just one note, he told me Chausaria would practice one single note for hours, just getting deeper into the sound. He said “Indian music is circular, it moves inwards deeper and deeper. Western music is linear, so it keeps pushing forward”. I found something like that in performing Steve Reich’s music. Also more recently whilst playing the powerful music of Julius Eastman for four pianos at the opening of the Maerzmusik Festival in the Haus der Berliner Festspiele. So whenever I’m alone at the piano, that repeating pattern structure is often my way in.’

Trust in her intuitions has served Sassoon well – all the way up to discovering the deepest roots of her identity and musicality mid-gig, while she was still living and working in the UK. It was a revelation that happened a few months before the family’s move to a completely different Berlin life that she immediately fell in love with, and still is. ‘I was doing a gig in Newcastle, and I started playing a composition from my first solo album, New Life,’ Sassoon recollects. ‘In the midst of it, I suddenly had an image of where I’d come from – about my mum, the Holocaust, her grandparents who had died in Auschwitz. Those images must have been affecting the way I was playing, because after the gig, someone in the audience asked me “are you Jewish?”. Lothar said to me “this is not something to hide…it’s something to explore”. First of all I thought “really?”. I’d never thought of myself as a Jewish musician, I don’t like klezmer music, I don’t consciously try to represent that culture or history. But within a year of that event we’d moved to Berlin and I found that my music had started to reflect my German-Jewish identity. This music was later released as Land of Shadows – that was my second solo album, on Ulli Blobel’s Jazzwerkstatt label.’

In February 2020, just before the first lockdown happened, Julie Sassoon had toured with her quartet, and eventually recorded its new album at the Loft in Cologne during the period of eased restrictions – but like every other musician, she has no clear idea what the short-term future holds, or when touring with that band might be possible again. She and Ohlmeier also dream of the prospect of one day taking to a stage with daughter Mia on drums. ‘She has everything we’ve got, but better,’ Sassoon laughs.

Before we part, I ask Julie Sassoon if she meditates. Those eloquent descriptions of improvisation’s invitation to suspend conscious thought and go with the passing vibe would seem to suggest it. But when she laughs at the idea, it’s not in dismissal, but as a phlegmatic acknowledgement of her own restless nature. ‘I’m too full of nervous energy for that,’ Sassoon says. ‘I had my birth chart read once, about 20 years ago, and the person doing it said “you’re not someone who could meditate”. It’s true, I’ve tried, and I find I’m thinking about my breathing so hard I can’t breathe any more. But when I’m playing, I’m sometimes able to reach the place where I’m totally immersed in the moment, with no thoughts, just pure energy. So I guess that’s the form my meditation takes.’