Producer Gilles Peterson originally made his name in the 1980s as a resident DJ in Camden at the Electric Ballroom and Dingwalls playing the contemporary dance music of the time, variously known as Jazz Funk, Brit Funk and, in a later 1990s revival, as Acid Jazz. The significance of this music isn’t just that it was the predominant British dance music of the time, but that it used the rhythms and musical inventions then coming from electric Jazz. 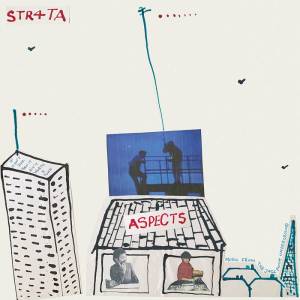 More importantly, however, the music was a London-based hub of creativity that let British dance culture develop its own distinct path and, crucially, was colour-blind at a time when the ethnicity of a British musician was still considered worthy of attention. This was the kind of music played by the likes of British bands such as Level 42, Imagination and Incognito.

Peterson has collaborated with the leader of Incognito, Jean-Paul “Bluey” Maunick to form STR4TA. This is an intentionally nostalgic band that endeavours to recreate the rhythms of the early 1980s, along with a consciously raw, relatively unpolished production sound. So, on Aspects, their debut album, we find slap bass, propulsive guitar, spare and punchy drums, falsetto harmony vocals, and floaty electric piano. This is dance-floor oriented music that is tight, taut and immediately danceable, but rather than being dependent on electronic instruments relies instead on musicianship and sympathetic production.

Peterson has a history of putting together imaginative collaborations that focus attention on easily overlooked musical genres from both the Americas and beyond, most famously on the album Nuyorican Soul. It is perhaps inevitable that he would eventually revisit the music that he did so much to champion and shape in his earliest days on the London scene. This is illustrated by the self-consciously fanzine-style album cover which features a montage of a decidedly youthful Gilles Peterson and a similarly young Maunick.

The album opens with the title track, Aspects, which could have been sourced from the back of a 1980s record crate. It is a checklist of the elements that drew people onto the Dingwalls dance floor, propelled by an infectious bass-line and a catchy chorus. This is followed by Rhythm In Your Mind, which sounds even more like a song from the time. There is a jazzier piano sound on the instrumental Dance Desire which allows Maunick space to show off what he can do with an electric guitar. Peterson displays his DJ credentials by following the serviceable We Like It with Steppers Crusade, a groove-based tune that steadily builds up to euphoric heights.

After the Rain opens the second side of the LP with a relatively thoughtful invocation of a good night out, leading into the similarly reflective Give In To What Is Real whose groove and bass line will appeal to fans of Level 42. The title of Kinshasa FC might be intended to evoke the comparable DIY ethos of contemporary Congolese music, but otherwise this instrumental tune only hints at the African rhythms beginning to influence British jazz and dance music of the time. The final track, Vision 9, might bring back pleasant memories of Jazz Fusion of the late 1970s and early 1980s, before it descended into its current state of soporific smoothness.

This is a record designed to please those with memories of London summers in the early 1980s when Robbie Vincent was featured on BBC Radio London, when night clubs were mostly small, intimate affairs and when pirate radio was often the only place you could hear the type of music featured on the album. However, for those of a different generation or with different memories, this is the perfect introduction to a musical genre which is nevertheless very much of its time. This is as much a credit to the musicians gathered together on the album, such as Francis Hylton, Matt Cooper, Richard Bull, Peter Hinds and Randy Hope-Taylor, as it with the partnership of Peterson and Maunick in realising what must have been a project they’d always dreamed of doing together.