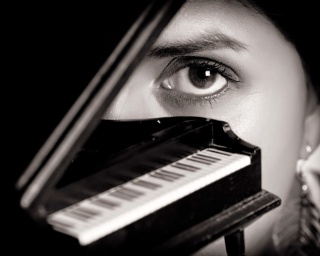 Multi-talented singer, songwriter, arranger and pianist Anjali Perin spoke with Catherine about her musical influences from Carnatic roots to Classical to Jazz.

LondonJazz News: Jazz and soul singer/pianist, songwriter and arranger – are you recognised equally for your musicianship and your singing?  If not, does it bother you?

Anjali Perin: I’m predominantly recognised for my singing, as my main performing exposure has been as a vocalist singing ‘ up front’ with a band. However, I spent many years learning and playing Classical piano and violin and I have also sought to develop my musicianship through those instruments alongside the singing. I loved being in orchestras and choirs throughout my childhood, which has definitely helped me to understand ensemble playing and communication. Piano was always my first love, so even if I’m not recognised for it as much as my singing, it is always there in whatever I am doing.

I don’t arrange for other people (yet!) so unless people are working with me on a recording or doing specific arrangements of mine on a gig, they may not know much about the arranging/producing side to what I do. However jazz improvisation is essentially ‘live composition’ and most gigs involve ‘on the go’ arranging, so I guess that mixed set of skills is always there.

I do find that people sometimes are not accepting of the fact that I have other elements to my music, in addition to singing, but that’s very much down to the pigeonholing that you find generally in music, be it in relation to confining people to their genres or skill sets coupled with a dash of sexism – I definitely don’t see men getting the same attitude when they mention scoring up a horn or string arrangement. We are in a better place now, though in terms of female musicians being empowered to get themselves out there as composers and arrangers, as well as players. You have to be fairly confident and resilient in your identity as it can otherwise be a challenge to stay true to the things you want to get out of your musical career and of course you have to choose the right people to have around you. I’m really keen to do more string and horn arranging, after having done a lot for my originals project. I really enjoyed seeing and hearing those ideas and parts come together and getting feedback from the players so I can develop that knowledge and maybe, at some point, start applying this to other people’s projects.

LJN: Tell us about the influence of your Sri Lankan heritage on your music from your early days singing Carnatic vocals.

AP: My mother has always had a love of Carnatic music, playing violin and singing and I attended many concerts from a very young age. I was brought up to appreciate that there were many different sound worlds, which I think has definitely influenced my attraction to jazz harmony and improvisation. From childhood I also learnt and enjoyed Indian classical dance, Bharatha Natyam, which features a lot of fast spoken rhythms to cue the dancer. The music mirrors the peaks and troughs and energy of the dance and helps build the excitement. I think that is partly why I love jazz so much – the swing rhythm just feels right and that excitement and drive is always there. Carnatic vocals work very much in your ‘chest’ voice and involve earthier tones and freedom to embellish and work with many subdivisions across different pitches. When I started listening to jazz, I loved ‘ballsy’ singers like Ella, Sarah and Carmen – their sound felt familiar to me and their total freedom and innate swing really resonated with me.

LJN: What led you to quit a successful career in the City to be a full-time Jazz musician and was it an easy transition?

AP: I always wanted to do music but never had the confidence to believe I could succeed so I followed a safer path. City life was a pretty soul-less one for me, as I did not enjoy the day-to-day work of corporate law or the hours. The minute I started getting back into jazz and going to jam sessions, I felt re-connected to myself and loved the people I was meeting on the scene and the kind of learning curve I experienced was so much more exciting and interesting. The catalyst came when I attended the Glamorgan jazz summer school whilst still a lawyer, then run by Simon Purcell and Dave Wickens. There I was inspired by so many amazing jazz musicians, like Liam Noble, Julian Siegel, Chris Batchelor, Nikki Iles, Liane Carroll etc etc who displayed amazing humility for their art and great camaraderie. Simon recommended I sought information as regards applying to do a Masters at The Guildhall and it kind of snowballed from there. I had not really considered that I could get back on that musical path and it was like being shown a door that I had thought was locked and being told that it was actually open.

I quit my private practice job and got a part-time in-house legal job to allow me time to get a few lessons, do the odd gig and prepare for the Guildhall audition. I didn’t really tell many people when I went for the audition and I was totally gob-smacked when I heard I had got a place – there had been so many singers auditioning that day and I really did not know how I did in comparison. I just remember enjoying going in and jamming with the tutor band and feeling really inspired. The whole atmosphere of being in that conservatoire setting was amazing. I was lucky that I got into working with quite a few different people whilst I was still at Guildhall so I when I left it wasn’t a massive anticlimax. I was under pressure to ‘ go back to law’ and keep a roof over my head, so I had to make music work for me. It took about 6 months to a year to get a good balance of work and I did take on some teaching to allow me to do more of the projects I wanted to do. It’s always a balancing act though but those first few months post-college gave me a lot of resilience and determination.

LJN: You enchant the audience with your playing, song interpretation and warmth of personality at every performance I have attended.  What qualities do you look for in the musicians you work with?

AP: Openness and willingness to go with each other on the music and create ideas together and play the best that we can. I like people that are listening enough to respond to little ideas or cues that are thrown out there by a member of the band and who know also when support is needed to allow someone to kind of ‘take flight’.

Working with people who have a good vibe and are easy to be around is always preferable to an amazing musical ‘technician’ who may have fantastic chops but not much emotional connection either to the music or to the people they are making music with. Some people can be a bit of a closed book offstage but totally commit and go for it in stage – I just need to see and feel that commitment to being part of a team effort. Otherwise I think that lack of connection is reflected on stage; your audience feels that tension and you don’t have the confidence to follow your ideas and instincts on the tunes. You kind of have to have each other’s backs and actually be interested in what is going on around you. I’ve seen too many gigs where there are great individual players but they don’t play as a band and that definitely comes across in the music…

LJN: Work-life balance – how do you juggle being a Mum, wife to a fellow musician, performing and composing?

AP: I’ll tell you once I finish sessions with my therapist…. Seriously though, it is a challenge and I definitely feel like these years with my daughter are such a gift that I have actively (and happily) stepped down on certain projects and gig commitments for a while – I won’t get this kind of time with her again once she is in school. Motherhood has actually helped me clarify my goals and put me in a more honest space musically. I think my husband has also found that because our time is more limited. I now can only really focus on those musical projects which excite, nurture as well as challenge and encourage me to keep learning and developing my craft.

Being married to a fellow musician can be a bit crazy but I can’t really imagine doing things any other way. Family life and music run together which for me is far better than compartmentalizing and separating the two so sometimes I write my song ideas with my daughter next to me or we have rehearsals whilst she sits observing the double bassist whilst playing with her toys… the chaos when things are thrown together in the melting pot is the essence of creativity and I find the less I try to streamline it all, the easier it is to make it somehow work altogether.

Of course there are days when I could happily be on a beach away from that chaos, but I think the benefit of living a musical life means that you won’t always function as others do, especially once you have children but it can be a wonderful thing if you can embrace it. I have many female friends in really high flying jobs, balancing careers and family life and I think they have it much harder as that world does not have as much flexibility and going ‘part time’ is often a career-limiting move. With music, you can still prepare arrangements, record an album, gig with different people and get projects off the ground, with support and the right musicians. You can still make things happen in a limited time and therefore feel like you are moving forward and keeping engaged in it.

LJN: What’s coming up next for you?

AP: I’m doing a few different projects. One is very much a ‘songwriter’ style album with my jazz, soul and funk inspired originals. It has been put together over the last few years as I am writing, arranging and producing it all myself (God help me) with a host of amazing musicians including backing vocalists, horns and strings. The material comes from a different set of singer-songwriter influences so it has a separate feel to my other jazz projects. I have loved playing those songs in different line ups so it’s really fun and allows me to spill out my everyday emotions.

I’m also working with some young songwriters to help co-write, produce and arrange their songs for recording, including backing vocal arrangements and horn/string arrangements. It covers a very mixed bag of styles, mainly folk-infused pop and jazzy soul, so we will see where that one lands.

Another exciting project features lyrics and vocalese that I have written to solos that have inspired me. I featured some vocalese on my first jazz album and I really found that kind of transcribing and lyrical application helped me get deeper into a tune and its soundworld. I am particularly interested in some of the modal compositions that artists and composers like Wayne Shorter, Herbie Hancock, McCoy Tyner, and Joe Henderson. That sub-genre of jazz composition really draws me back somehow to my Carnatic roots and it has a freedom and more open tonality that I want to be able to explore further. It also helps that I have been working with some musicians who I think are going to be a perfect match for that project as I’m looking to feature a varied line up of guest instrumentalists.