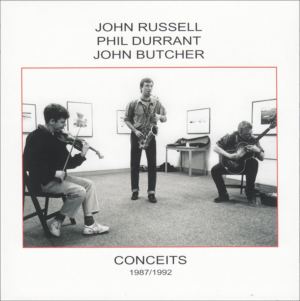 The playing on Conceits is marked out by sensitivity and restraint combined with dynamic invention. Recorded almost 30 years ago by the improvising trio of saxophonist, John Butcher, guitarist, John Russell and Phil Durrant, who played violin and trombone, it retains a freshness and maturity that stands the test of time.

The original vinyl album was put out in 1988 and launched the ACTA label. Devoted primarily to improvisation, ACTA was set up by Butcher, in association with Russell and Durrant, and released fourteen albums over the same number of years.

The eleven concise tracks on Conceits are augmented on this CD reissue on the Emanem label by a fifteen minute live recording of the trio made by Mats Gustafsson in Stockholm in 1992, adding a further dimension to appreciation of the trio’s range.

The structure of the album has a quasi-episodic quality. With the majority of the tracks between roughly two and three minutes, and the others only slightly longer, they have the feel of both fragments and self-contained vignettes.

Each improvised track relates to the others through the consistency of the trio’s shared vocabularies and the particular sound qualities that they nurture. There is a quirky, metallic, state of staccato about their world, liminal and distinctive, dry yet not without warmth and organic references.

The individual sounds are often unattributable to specific instruments and there is reward in concentrating on impressions and the imaginative thread. A Japanese flavour is implied when Russell’s guitar takes on the uncompromisingly sharp, plucked tones of a koto, or when Butcher’s saxophone might trade places with a hichiriki.

The language patterns of the natural world are indirectly evoked through repetitions, scratchings, calls and shuffling. Delicacy mixes with concentrated intensity. Stabs and bowings, guttural wails and short puffs of air, avian cooing and clucking, the humming of the hive, all flow with the feel of the mirrored observations of a field recording. Artisan activities – hammering, scrapings, light taps and paperclip clicks, reinforce the patterning, and gamelan delicacy blends with fleeting jazz phrasing from Butcher to alight on suggestions of human craft and community.

Yet, it is the overall abstract qualities that shine through, and the combination of the original recording, captured in a single day, and the complementary live performance make this an engaging and stimulating CD.

Liner notes, including those by Russell and Gustafsson, add valuable insights into the genesis of the trio, the album and the improvisation environment at the time.

Geoffrey Winston is a design consultant for arts clients. His reviews and drawings have been a feature of LJN since 2010.