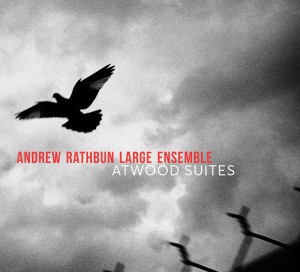 The plangent flugelhorn and trumpet solos of Tim Hagans flow throughout the two suites as the primary soloist on the CD. As liner note writer (and composer/pianist) Jim McNeely states: “Tim’s lyricism ranges from thoughtfully introspective to wildly expressive”. His achingly beautiful musings on the 2nd movement of Two Islands and his surging motifs in the swinging 3rd movement provide the listener with good evidence of the wide span of his emotional proclivities. He rises and fulfils his role with aplomb, as if he is co-narrator to Luciana’s resplendent vocal interpretations of Atwood’s words.

In addition to his prowess as a composer/arranger, Rathbun is equally eloquent in articulating his aims and processes adapting Atwell’s poems. “I don’t consider myself an expert on poetry but as a musician thinking about poetry it’s good to sort of resemble a lyric in a way. It doesn’t have to necessarily have a rhyming scheme but it has to have an internal natural rhythm that sort of draws me in to want to set it to music. Even if the phrases are in odd groupings or kind of have a strange gait it still had to be able to function within a musical phrase.” All sage advice to those of us who aspire to effectively mix and balance different mediums to create something unique.

Origin is an innovative Seattle-based label, and is currently celebrating its 20th year. It was founded by drummer John Bishop (with whom I had the honour of going to high school in the 1970s… as if any LJN reader needs to know this…). It has served Rathbun well. On this new album, his multi-talented and creative ensemble and the distinctive soloists have concocted a clear and unified vision, amalgamating Atwood’s writings into an impressive and epic work.