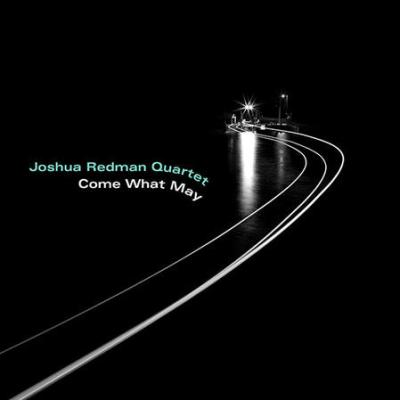 Jazz is a music of connection. Saxophonist Joshua Redman has talked in interviews preceding the release of this new album Come What May about the “level of trust and empathy, both musically and personally,” that there is in his quartet. It “allows you to be truly relaxed and free”. That comes from the fact that all four played together as a quartet for a long time. Redman, pianist Aaron Goldberg, bassist Reuben Rogers and drummer Gregory Hutchinson were constantly on tour from 1998 until 2001, and have stayed in touch. It turns out that Redman started again to write compositions for them to play as long ago as 2014, but it took until October last year for them to go back into a studio to record the seven tunes on this album. It really is some gap: their last recording with this personnel dates from 2000.

Redman said that the re-emergence of the vinyl album has given him a challenge he has particularly enjoyed: to go back to saying what you need to say in under 45 minutes, in the hope that the album might be enjoyed at one sitting.

Enjoyment might be the key, then. This quartet, certainly for me, brings back a particularly happy memory from the 1998-2001 era. I was lucky to hear them at what was and still is Redman’s home gig, Yoshi’s in Oakland. Gregory Hutchinson broke a drumstick. He signed it and gave it to one of my sons, then ten years old, who has kept it as a prized possession ever since. So when I listen to the forceful, punchy, precise yet on-the-edge drumming on a track like DGAF, I simply cannot help it if a smile returns.

I particularly admire Aaron Goldberg’s touch and articulation at the piano on this album. The rhythmic independence and complementarity of the hands in his solo on I’ll Go Mine are something special, and on the final track, titled Vast, he pulls off that wonderful trick of starting with evanescent, disconnected wisps consisting of just two or three notes, and starts to connect them and build them into something. It is no more and no less than hugely classy piano playing.

The title track is a harmonically roaming ballad sequence, and bassist Reuben Rogers’ playing as the anchor of the band, and when he solos, bring a reminder of what an authoritative bass player he is. It’s all superbly understated, less-is-more playing.

There are very different grooves here, and the appeal of this album is its variety. Swagger Bear, for example, has a clever little kick in its basic rhythm: it is a Charleston which dodges the one. And there is an ever-present sense of “standing on the shoulders of giants”, AKA stealing from the best. A track like Come What May feels like a cousin of Sam Rivers’ Beatrice, particularly the Stan Getz version (the tempo is almost identical), whereas DGAF starts off with a call-and-response with the drums which joyously inhabits the world of Hank Mobley’s Workout. Up to a point: Redman’s fluency, virtuosity, and comfort, ease and speed while scampering around in altissimo register are of a different time and a different order.

Another happy recollection of mine from that Oakland gig was that the tune Suspended Emanations, recorded on the album Beyond, was in fact a visual gag of letting go of the instrument, which only really made sense when one saw the band live. And that in turn is a reminder that the album merely prepares one for the gig: this is a great live band. They will be at Cheltenham this weekend as a trio minus Aaron Goldberg.

In the case of this listener, jazz is also about making joyous connections and especially re-connections. I have listened to this album a lot, and can’t wait to see this quartet again live.