Guitarists Libor Smoldas from Prague and Nigel Price from Surrey have six UK dates between 17 and 22 June 2019, in Swansea, Swindon, Bristol and the Isle of Wight, bookended by London. Sebastian found out more:

LondonJazz News: For people who don’t know you, Libor, can you sketch in some biographical detail?

Libor Smoldas: I am 37, have played jazz guitar for living for all my adult life. Though I have travelled a bit and spent a lot of time in Australia I never moved out of Prague, Czech Republic, where I grew up. I’m a happy husband of a jazz singer and a father of three sons. I play all over Europe, also in the US and Australia. I have worked with many a great musician outside my country, namely Bobby Watson, Adam Nussbaum, Brian Charette, Jay Anderson, James Morrison, Jeff Ballard and more. I like to play jazz guitar with no affects, I love music and I love people.

LJN: And how is the scene in Prague?

LS: We have always around seven jazz clubs with live music every night, that’s makes Prague very special and it is a privilege to live here and make music here beacause we get to play a lot. I tend to work every night. The scene, I dare say, is on a very good level, especially since musicians from the West started pouring in after 1989.

LJN: Your bio mentions George Mraz. Has he been a significant figure in your musical life at any point?

LS: George Mraz – or Jiří Mráz if you like – one of the most acclaimed jazz musicians who came from my country, was kind anough to play on my second record (together with Sam Yahel and Jeff Ballard) when I was very young and unknown. He showed trust in my playing and has always been very kind to me. I learned from him a lot.

LJN: How did the idea of this little tour evolve?

LS: We met on a gig of four guitarists at Pizza Express which was a part of Global Music Foundation workshop. The GMF, by the way, is a marvelous organization led by Irish drummer Stephen Keogh (well known to the London jazz listeners) who also introduced us to Nigel. Nigel is an amazing player so naturally I contacted him when I got the idea of organizing a tour in the UK. Frankly, how can you resist playing with somebody on that level especially when he plays the same instrument? That’s sounds like pure fun to me. 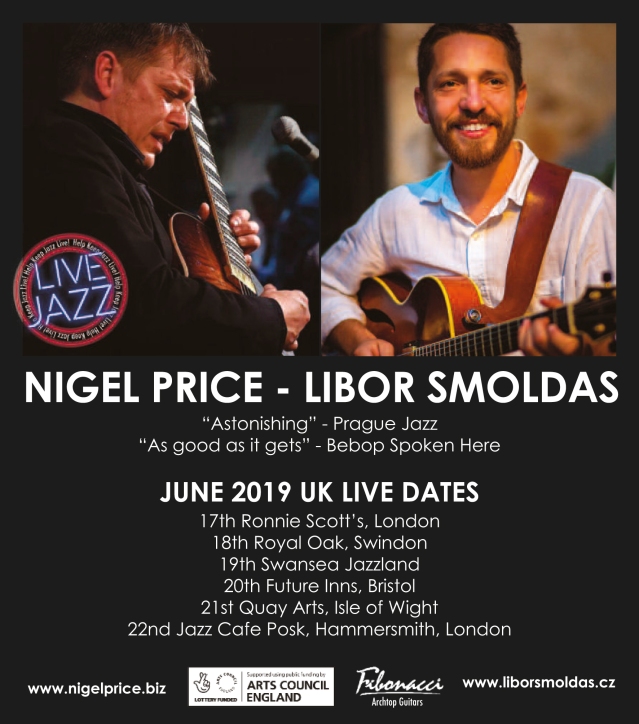 LJN: Nigel, how did you first meet/hear Libor?

Nigel Price: We met a couple of years ago when when we shared the stage, along with guitarists Jim Mullen and Nick Fitch, at Pizza Express on Dean St for a tribute to the recently departed Louis Stewart.

LJN: Describe what happened the first time you played something together.

NP: I can’t remember what the actual tune was but it was clear from the outset that we were kindred spirits! We had a few beers afterwards and got on like a house on fire so I’m really looking forward to this tour.

LJN: Libor you’ve played a few times in the UK before right?

LS: I have taught on several Global Music Foundation workshops in London, also played venues like Spice of Life and Pizza Express. My first gig in the UK was years ago at Cheltenham jazz festval. I also did a gig in Swansea in Wales with Dutch singer Judith Nijland (we are returning to the same stage now with Nigel).

LJN: Nigel, how are Czech audiences compared to UK ones?

NP: I toured all over the Czech Republic in February 2018. Fourteen dates straight with two fantastic musicians – Jakub Zomer on organ and Tomas Hobzek on drums. We had a lot of time to talk about this. Jakub explained to me that in effect the people of the Czech Republic were largely denied Western music until the fall of the Berlin Wall in 1989. Jazz was apparently available but much of it was “versions” of western records by Russian bands. I hope I’m remembering that correctly!

As a result, the jazz audiences are now very serious about their music and the reception was really startling. Inspirational, even. I met the great tenor saxophonist Osian Roberts when we played in Prague and mentioned that one of the best crowd reactions was in Zlin, a few nights previously where they went crazy, roaring and shouting. One of Osian’s musician friends said “They are always like that in Zlin, whether there is music or not.” Ha ha!

Seriously though. There is a passion for the music there and many dedicated clubs. Jazz is very much alive and well in the Czech Republic.

LJN: Describe each other with three adjectives.

LJN: Do you have similar musical enthusiasms?

NP: Of course. We both play jazz guitar and we both respect the heritage of the music so there is a huge amount of common ground in Kenny Burrell, Wes, Benson, and pretty much any of the melodic, blues and soul driven musicians from across jazz’s history. We both lead our own organ trios too. In fact, we have been living parallel lives for years!

LS: We both come out of a similar musical background – one leg firmly rooted in the jazz tradition, the other in the now. I could heare from the first notes Nigel played we have listened to the same albums and people, yet our style is quite different which of course is most fun.

LJN: What will you play on the tour… presumably Wes Montgomery is in there?

NP: We haven’t spoken of Wes but I’m sure there will be a conversation there at some point!
We have a shared interest in playing standards with a contemporary twist and both Libor and I have written many contrafacts. We’ll be playing some of these but I think it’s also important not to alienate audiences so there’ll be some familiar stuff in there too, I’m sure.

LJN: I’m curious about affinities beyond music… anything else you have in common… presumably you are both hard-working?

NP: Beyond music? Is there anything beyond music? I think we both have a good work ethic and a desire to celebrate the music as a shared experience. I personally don’t find time for an awful lot else except for my hilarious family!

LS: Both family men, both making our living with our hobby, both good organisers.

LJN: Libor, you post pictures of ice-swimming. Is this a tradition?

LS: I guess there are quite a few things about me that other people find unusual such as not wearing shoes, staying in a dark room for a week, etc. Ice swimming is one of them. What can I say, I don’t subscribe to conformity, much as I know we are all different (and the same at the same time) and I think we should allow ourselves little weirdnesses if they feel right, as diversity is crucial. After all, as John Scofield put it: Hang on to your eccentricities, because they will give you a style.

LJN: Nigel, ice-swimming yes or no?

NP: I don’t like to answer questions with one word answers but… No.