Picture this quintessentially  English scene. A marquee is set up on an ample village green in the heart of leafy Surrey, the sun breaking through, local beer from the barrel, enviable properties all around.   Could this be the W.I.’s annual flower and produce show? Absolutely not, rather a full-on afternoon jazz festival, organized by the tireless musician/activist Marianne Windham, she of Guildford Jazz and beyond, in aid of Challengers, a charity concerned with disabled children and supported by the village association. What’s more it has attracted some 350 plus paying punters, seated in and out of the marquee, with picnics aplenty, all clearly keen to support a good cause and absorb some high-quality music. 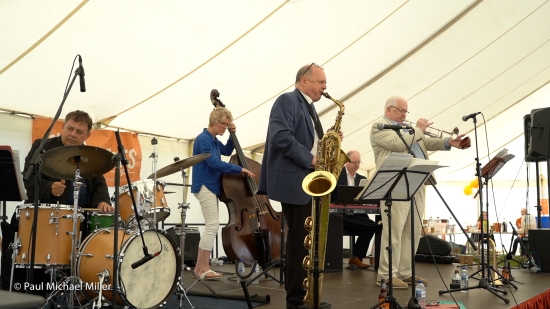 The 18-piece Somethin’ Else Big Band was up first, its players mostly local to Guildford with Ms. Windham on bass, and positively stormed into Manteca this prompting the first of a series of solos from tenorist Sam Parker, ‘everybody’s favourite’ according to band MD Chris Green. More good things followed but the band’s best came with the addition of guest vocalist Georgia Mancio. How gratifying to hear her sing standards in front of a mighty ensemble like this, the clarity of her line, her distinctive vocal quality and lyric understanding apparent to all. Just to hear her sing S’Wonderful or Natalie Cole’s L.O.V.E. with real swing momentum was feast enough. Mancio radiates good humour, offering peerless diction alongside a kind of jazz joie de vivre that is very enticing indeed.

Bandstand cleared, it was the Simon Allen Quartet, with Tom Cawley playing electric piano, Laurence Cottle on bass guitar and young newcomer Jack Thomas on drums. Allen is a formidable saxophonist, on both tenor and alto, and occupies that interesting territory between contemporary straight-ahead and jazz fusion, building long, fervent improvisations on such things as Ellis Marsalis’s Swinging At The Haven or a cleverly multilayered version of Seven Steps To Heaven. Setting these hectic items aside, he also excelled on his own ballad Song For Emily, with Cawley’s limpid keyboard lines like a balm.

For many in the audience, the Festival’s headline act, the Alan Barnes-Bruce Adams Quintet, was just the ticket. Resourceful mainstream playing, pleasingly varied repertoire, enough Barnes quips to tickle every rib, and an exuberant delight in invention: who could want for more?  With Clark Tracey on drums, the time feel was just right, Ms. Windham locked in ably alongside on bass, and that fine pianist Robin Aspland in exhilarating form. Bruce did his two-instruments-at-once thing à la Clark Terry, Alan dipped into his inner Adderley on Cannonball, Adams put the Harmon mute in for The Harmon Blues and then played Skylark as a poignant flugel ballad before they collectively roared into Hollywood Stampede. Urged on by the crowd, anxious for more, their version of Spontaneous Combustion wrapped up the festival in, yes, truly festive fashion.