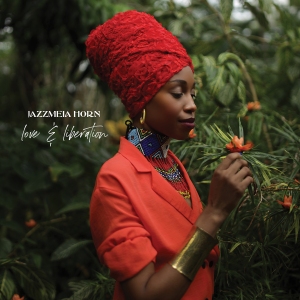 The word “effortless” is an important one when writing about or even just thinking about any kind of performance. As anyone who’s tried it knows, appearing to make no effort while singing or playing (or dancing, or acting) is one of the most important techniques to learn, especially when you’re doing something as innately difficult as music like this. Well, the woman with the best name in jazz is living proof that after years of practice, sometimes you really can sound as effortless as she does on this new album, her second.

Jazzmeia Horn operates with the same feeling of ease and sophistication as we have come to expect from other younger American female vocalists like Cécile McLorin Salvant or Kandace Springs. But she also has a lot of sheer vocal power, as on Green Eyes, where the scatting is best described as muscular, and she can belt out a naughty blues just as well as Cécile (e.g. Still Tryin’).

She displays immaculate taste in her choice of material, and she has the writing chops: all but four of these 12 tracks are self-penned. I particularly liked the longish ballad Legs and Arms, where the influence of Sarah Vaughan is evident, especially in her use of curly glissando, and her ability to zoom up and down through a wide vocal range. On the soul ballad Reflections Of My Heart she harmonizes beautifully with drummer/vocalist Jamison Ross. Ah, but can she do the standards? Yes, of course she can: witness I Thought About You, featuring just her and bassist Ben Williams.

On Searchin’, we are in the land of bebop: Horn is very good indeed at high-velocity vocal improv. The ghost of Jon Hendricks is present here, and again on Hubert Laws’ No More, a song for which Hendricks supplied the lyrics. (In fact, in 2016, before she started making albums under her own name, the 25-year-old Horn appeared on what I believe was the very last album to feature the 95-year-old Hendricks – Meet Me At Minton’s by the JC Hopkins Biggish Band.)

In addition to Ross and Williams, Jazzmeia’s musical collaborators are Josh Evans on trumpet, Stacy Dillard (tenor saxophone), Victor Gould and Sullivan Fortner (both piano), all of them superb.

Peter Jones’s biography of Jon Hendricks will be published by Equinox in 2020.