This gig was part of The Shape of Jazz To Come, a Vortex programme supported by the Dave Holland – Evan Parker Fund.  It takes its title from the Ornette Coleman album which was a high water mark for free jazz. Although the programme does not always mirror Coleman’s aesthetic precisely, it does showcase performers with a cross-genre and multi-media background – people who are breaking boundaries.

Seven Japanese Tales was inspired by seven short stories by Junichiro Tanizaki which deal with sensuality and eroticism. The eastern references are not that obvious but, happily, the music still stood on its own feet as a coherent piece of jazz. 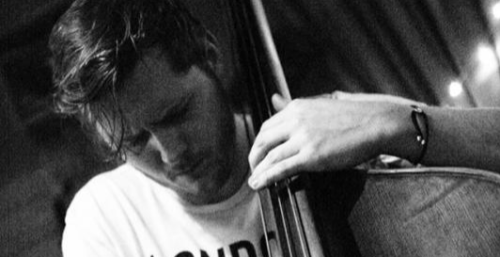 You could see at once why Dave Holland would like Joe Downard as a double bass player. He is combination of composer, band leader, time keeper and fluent soloist that augers well for a long career. Musically he is constantly inventive without being fidgety, so although he awarded himself several solos it never felt too much and between times he turned out a repetitive pulse when the music demanded it. It was all accompanied by a slightly rockstar sensibility, with flowing locks under a baseball cap and expressive body movements.

As well as an extensive cross genre CV as a sideman, Downard has just completed a Masters at the Royal Academy of Music and his band was made up of people of similar age and reputation. On drums, Felix Ambach played loud, using sticks throughout, with lots of deep tom-tom and kick drum (and conversely, hardly any, if any, brushes, mallets, gongs, or dangling bells that people usually associate with Japan). Ambach has a big band background, which might be where this propulsive energy comes from, but, transferred to a small group setting at rock concert volume, it gave the music the exhilarating feel of a long drive in a fast car with the windows open.

There were two keyboard players (Coleman banned them from his lineup, incidentally). Rupert Cox played synths, a modest collection of small keyboards. Inevitably, in the excitement of a live gig, quite a lot of the shading and colour he provided got overwhelmed, whereas on the recorded versions it creates a Weather Report/In a Silent Way vibe. He did take his chance to shine on the solos, mainly single-note, right-hand biased with a jazz-rock feel. In a similar manner, Will Barry on (acoustic) piano spent the first part of the set providing well-mannered, low-volume fills but then leapt into life with three attention grabbing Monk-meets-Hancock solo assaults, full of dissonance and quirky twists. Jazz needs more keyboard players like this.

The sextet was completed by two horns, with responsibility for playing the themes together. Alex Hitchcock on tenor saxophone took a couple of up-tempo solos that showed off his technique to the full and a ballard which gave him a chance to expand and develop his ideas more. James Copus, on trumpet, took the lion’s share of the solo work with lung-busting and indefatigable inventiveness.

Impressively, this music was delivered in a single 90-minute set which means that the seven pieces were on average 13 minutes long. To achieve that without deteriorating into a self-indulgent blow-out is a feat. Part of the answer is compositional strength, with each piece having several sections incorporating different instruments, tempi and themes. Part of it, according to Downard’s programme notes, is a willingness to accept “unsolicited improvisations”. A lot of it is down to the sheer creativeness of the musicians and their ability to solo for long periods without running out of ideas.  If I say James Copus was particularly long winded, that’s a compliment. The result was high octane music that kept your interest throughout.

There are earlier versions of some of these pieces available on Soundcloud (with a different drummer) but the band was also due in the studio that day after this gig to record a complete album, which would be a good place to start for new listeners.