Earlier this year, as Waltham Forest became the first ever London Borough of Culture, Mark Kass, a prolific promoter of the music scene in East London, had the idea to launch a brand new jazz festival celebrating the wealth of talent which the area has to offer and set this alongside the best of British jazz. He discovered a perfectly formed ballroom lurking in Leytonstone, unloved and under utilised, above the Red Lion pub, and set out to put together a programme that would enable his debut festival to go out with a bang on Saturday 5 October.

Billed as “one day, one venue, 13 bands, 56 musicians”, Kass organised it so that there was a constant flow of young jazz talent playing for free in the bar downstairs, interlaced with some stellar line-ups and inspired pairings upstairs, for the paying punters. The set-up worked really well, mixing regular customers with out-of-towners, some even from overseas, who’d made their way up the Central line to sample the delights of this mini festival. 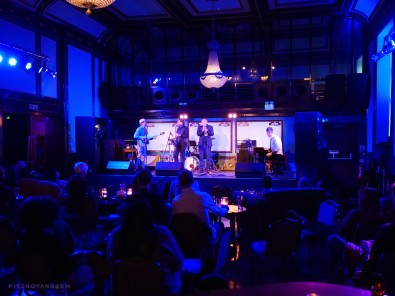 Leytonstone ballroom, resplendent in blue light, was laid out cabaret style, and the proceedings kicked off with young band Sonus Quartet premiering some new material, then Dee Byrne took a turn at the helm armed with nothing but her saxophone and a few gadgets and pedals to create an intoxicating soundscape. Local boy Dave Manington followed this up with an outing of a string of jazz standards from the year 1959 from his quartet. Next up was Clement Regert’s Wild Card, whose eclectic set, bookended with two originals, was given the vibrant treatment, with Andrew Noble on the Hammond organ.

Kass’s vision was also to feature young musicians just emerging onto the scene, so who better to pick than Tomorrow’s Warriors’ Female Frontline, comprising eight young women playing top drawer arrangements of Roy Hargrove, Miles and Monk numbers. Monk was a firm favourite in the next band’s setlist too, as Jay Phelps joined forced with BBC Young Jazz Musician 2018 Xhosa Cole’s quartet to deliver burning versions of Criss Cross, I Mean You and others. Taking things into a more mellow vibe, Rob Luft’s Quartet spun out some lovely rhythmic textures and melodic fragments, preparing the way for the headline act, the award-winning nine-piece Fat-Suit, currently touring their fabulous fourth album Waifs and Strays, to close the night.

Sarah Chaplin is the co-founder of JAZZLONDONLIVE