Ann Braithwaite, originally from Barrington, Illinois, a Chicago suburb, has been running the Boston-based PR firm Braithwaite and Katz Communications since 1986. Journalists love working with her for the quality music she connects them with, and the many long standing working relationships she has with clients – from Montreal International Jazz Festival and New England Conservatory to musicians Fred Hersch, Maria Schneider, Wadada Leo Smith and Satoko Fujii – is testament to the quality of her work and her dedication to promoting music. 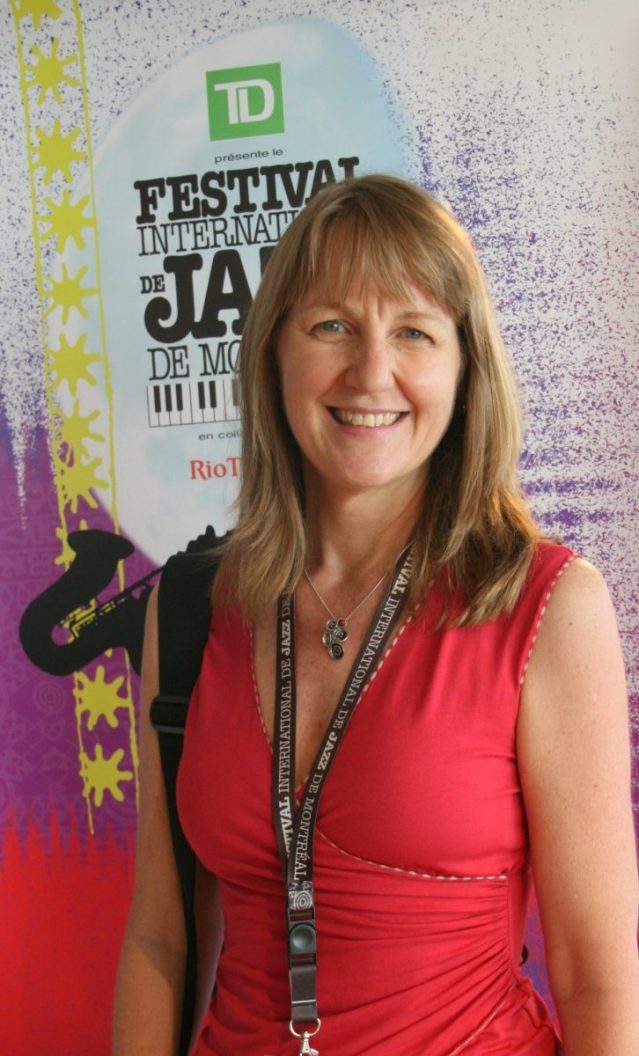 LondonJazz News: What or who first inspired your love of music?

Ann Braithwaite: My older sister Nancy is a classical clarinetist living in the Netherlands. When I was in high school she taught me to play clarinet and I joined the band. A lot of my friends from band were also in the jazz band and they introduced me to jazz by taking me to clubs in Chicago. We went to Joe Segal’s Jazz Showcase and heard so many great musicians. We listened to a lot of albums, haunted record stores and had a blast. My senior year in high school, while on a band trip to Philly, a bunch of us snuck out after curfew to hear the Sun Ra Arkestra. That was in 1977 or 78. That music blew me away.

LondonJazz News: And how did you end up working in PR?

AB: At Tufts University, where I was an English major, one of my teachers, Michael Ullman, was the Boston Globe’s jazz critic and invited me to come hear Sonny Rollins because I was writing a paper on him for my jazz history class. I was completely in awe when Michael took me backstage to meet him!

After I got my master’s degree from Medill School of Journalism, I got a job at New England Foundation for the Arts (NEFA) as assistant to the director of PR and development. I learned to do PR on the job and loved it.

LondonJazz News: When did you decide to start your own company?

AB: One of my friends from NEFA was in a band called Full Circle, which had just signed with a label, and shortly after I started working with them I left my job. Luckily, I was young and single and could live almost on air. The first year I went to an accountant to do my taxes and he asked incredulously, “How do you live?”  I think a lot of musicians can relate!

LJN: There’s a mystery in the name… Who is the Katz in Braithwaite and Katz?

AB: Jonathan Katz was a grad student at BU who did an internship at NEFA. I was officially his boss, but he was already such a PR expert that one of his teachers at BU asked if he wanted to promote a play. It was called Melted Ice Cream and I think that was our first project together. We started doing other arts-related projects and worked together for at least a year or two. Once he graduated from BU, he got a job in medical advertising and he now heads the company he started with. He told me to keep the name though because maybe he’d want to come back someday. I’m still hoping!

LJN: You also have a team around you. How many are you now?

AB: I like to keep the business fairly small, so I get to work directly with all of our clients. I’m lucky enough to have a few excellent part-time folks on the team, who together work about the same number of hours as one full-time person. They all have very different skills, so it works out really well.

LJN: When you get new people in to work with you do you have a standard ‘do’s and dont’s’ speech and what is in it?!

AB: The first thing I tell new staff is that we have this tremendous opportunity to help musicians and that our hard work and passion can make a difference in their lives and careers. I reinforce the importance of treating everyone with respect, that we’re a service business and our job is to serve our clients and to make each journalist’s job easier. When someone says jump, we need to jump and jump high! I also talk about deadlines since this is a high-energy, deadline-oriented business.

In addition, I stress the importance of writing everything down and staying organised because we need to keep track of a lot of details. Every review and every conversation or email with a journalist gets written down in our database and we each keep a running to-do list.

LJN: Have there been moments when the technology-driven changes going through the music industry have really hit home for you?

AB: As we are seeing today in so many areas, technology can be a force for good or a force for evil. The switch to streaming music has been a huge issue for musicians who used to make a good part of their living selling albums. But the internet has also opened doors for them to reach directly to their fans to fund their work and get discovered.

What has really hit home is how many music and arts writers have been cut from papers and magazines, and seeing so many publications shut down. Some have been able to stay afloat with a combination of print and online journalism and there are many great online publications, such as LondonJazz News, which provide a great service to the musicians and the music-loving public.

AB: Music quality trumps everything as far as I’m concerned. If I don’t love the music and feel it has merit, I won’t take on a project. The story is also important though, especially in order to get feature articles. What makes this artist or project different from everything else out there, what inspired it, etc.

LJN: How did you first get involved with the Montreal Jazz Festival?

AB: In 1995, they called me to do a press conference in Boston. They didn’t know that I’d never done a press conference, but I said yes and figured it out. Over the years we’ve been lucky enough to expand our work and bring journalists from all over the world to cover the festival, which is truly one of the world’s great music festivals. We’ve helped to develop a true community of writers and radio hosts who gather there every year, all bound by their passion for the music. One of the things I most look forward to all year, in addition to all the incredible music I get to hear at the festival, is seeing so many of my journalist friends there. I also love introducing journalists who’ve never been to the festival to writers who’ve attended for years. So many friendships develop and for me it’s like a giant party – great fun!

LJN: Have there been any highlights you remember with particular fondness?

AB: Years ago, we worked with Medeski, Martin and Wood from their first album on Accurate Records until they got signed to Blue Note. I remember listening to a cassette tape of their music before the album came out, and knowing it was something special. Journalists agreed and it was fun to be part of their growth. They did the hard work, too, touring constantly and gaining fans along the way. After they opened for Phish and blew the audience away, the floodgates opened and they had a much larger fan base.

We also first worked with Maria Schneider on her 2004 album Concert in the Garden and I was so proud when it became the first recording to win a GRAMMY Award with internet-only sales. It also blazed the crowd-funding trail as ArtistShare’s first release.

LJN: Is what publicists need to do to be effective still the same as it was?

AB: Yes. The basic qualities one needs are the same on the relationship level, but the technology has changed some of how we do our work. Technology offers opportunities to share music and videos in different ways at lightning speed, which is important in our connected media environment. Some press folks prefer to get downloads. There are many writers and radio hosts who prefer to get physical CDs or LPs and we send them because we strive to make each journalist’s job easier in whatever way we can.

LJN: This is a piece for International Women’s Day. Do you think female musicians are starting to get more of the credit they deserve in jazz?

AB: There are so many great women making jazz and I’m glad there’s an increasing awareness of their excellence. After the “Me Too” movement, promoters and others are beginning to think about who they hire and, I hope, give more opportunities to the incredible female-led bands and women in this music.

LJN: Have some of the female artists you’ve worked with done interesting things to further the cause of women in jazz?

AB: The great singer, composer and improvisor Sara Serpa is a member of the We Have Voice Collective – an organisation of 14 female performers, musicians, thinkers and scholars who have banded together to “engage in transformative ways of thinking and being in their creative professional world…to create initiatives that actively enrich our performing arts community,” to bring attention to issues of inequity and “to shift the cultural landscape within our community to foster awareness, including, and the creation of safe(r) spaces for all.”

I also think that artists like Serpa, and Maria Schneider, who use their art to bring attention to the issues of our time, are powerful role models for other women in jazz.

Serpa’s upcoming project Recognition: Music For a Silent Film, is a singular multi-disciplinary work that addresses Portuguese colonialism in Africa, and through that also addresses the Western world’s “shameful past of occupation, exploitation, slave trade, oppression, racism, segregation, violence and abuse.”

Maria Schneider is also an activist and a strong voice for music advocacy. She has been increasingly outspoken about Google and big data companies and her upcoming album, Data Lords, is inspired by the conflicting relationships between the digital and natural worlds. “Musicians have been the canary in the coal mine,” Schneider says. “We were the first to be used and traded for data.”

LJN: Is this a career that you would recommend to your younger self (a journalism graduate) now?

AB: Yes, I would absolutely recommend this to my younger self. I get such great joy from helping musicians get the word out about their art, and hearing so much incredible, transformative music. So many of the artists and journalists I work with have become great friends, which makes the work even more fun. And being part of the jazz community opens doors around the world.