In 2005, Digby Fairweather introduced me to a quite remarkable person. Sue Davies, who passed away peacefully from cancer on 18 April 2020, four days after her 87th birthday, had been widowed in 2004. Her late husband was John RT Davies, a member of the Temperance Seven and a world authority on the remastering of classic jazz recordings. In their barn in Burnham in Buckinghamshire was one of the most important collections of pre-war jazz in the world. The family had made the courageous decision to bequeath the collection to an institution that would keep access to it available to collectors and scholars, and Digby thought that, somehow, I might be able to help.

Sue and I did work together to make it happen, but it was above all her connections – such as Dan Morgenstern of Rutgers who wrote in support – her clear-thinking and her sense of purpose, and also the kindly agency of Professor William Brooks and others, which ensured that the collection, consisting of nearly 20,000 fragile 78rpm records plus LPs, ended up being shipped safely by van to the Borthwick Institute on the York University campus, where it remains (LINK). 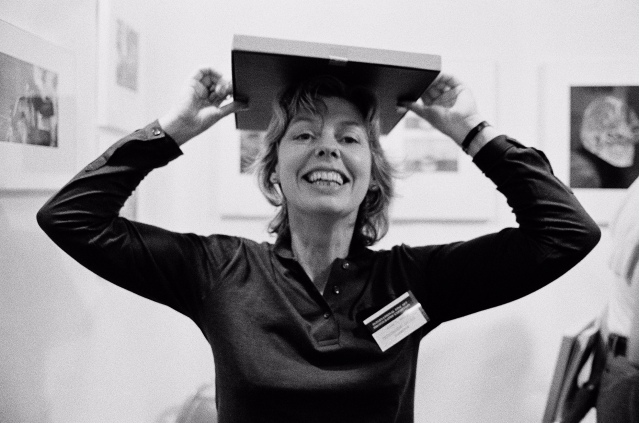 Sue Davies at the Photographers’ Gallery in 1980. Photo copyright Chris Steele-Perkins and reproduced courtesy of the family with his permission.

It must be said, however, that in the context of Sue’s career this achievement arguably pales into insignificance. It was her vision and persuasiveness that enabled the pioneering Photographers’ Gallery at No. 8 (and then also, from 1980, at No. 5) Great Newport Street to get off the ground. That remarkable story is well told in obituaries and tributes:

Digby Fairweather writes: I am deeply saddened to hear of the passing of Sue Davies. Apart from being a visionary she was a woman of truly outstanding qualities – grace, generosity and a personal dignity matched by an equally profound warmth of spirit. As the lifelong supportive partner of the great musician and record producer John R.T. Davies she was also one half of a partnership which saw the classic early jazz discography preserved both comprehensively and to incomparable quality, notably via John’s ‘Retrieval’ labels. I shall miss her very much indeed.

For my own part, I am also very grateful for Sue’s friendship and support. Once she had moved from Buckinghamshire to Fulham, she supported LJN in its first year in 2009 by becoming one of our very first reviewers. She didn’t want to write under her own name but, using the pseudonym “Mystery Chelsea Shopper”, she went to her local club, the 606, and wrote vivid descriptions of acts as diverse as Mike Westbrook, Lillian Boutte, and the Yamaha Jazz Scholars, and also ventured to the Dragon Hall in Covent Garden to write about the Jazz Pastilles (REVIEWS). She would invite me as her guest to the Chelsea Arts Club and would encourage me to sit in with the band. That once led me to have the unforgettable privilege of playing alongside the late great Ray Warleigh. I remember her playing me private recordings of Marty Grosz made at the Davies home in Burnham.

In sadness and in gratitude.