Bruno Heinen’s new album Out of Doors is a successful combination of things normally seen as opposites. It has structure and form but also a great sense of spontaneity and flow. It is inspired by Bartók. And by Ellington’s “Money Jungle”. And brings accomplished trio playing. And a lot of joy. Feature by Sebastian Scotney

Sometimes people writing about jazz recordings make a distinction between albums which capture a snapshot of a point in a musician’s evolving career, contrasting them with those which represent a finished, carefully planned and thought-through complete work. What is unusual about Bruno Heinen’s new album Out of Doors is that it so effectively manages to be both. Repeated listening reveals the ways that structure and form have been so successfully combined with spontaneity and flow.

And also, the more one listens to Bruno Heinen talking about it, the more one is aware of a musician who is not just aware that he is moving forwards but also can describe the process and the direction surprisingly well.

In the first place there is a real sense of having opened up new possibilities with formation of what prior to lockdown was in the process of becoming his regular trio, a group which he definitely wants to continue to develop with.

The other two players in it come from very different musical backgrounds, but with at least one common thread – Italy. The drummer is Gene Calderazzo, born in New York, but with a family lineage from Reggio Calabria in Italy: “I’ve really wanted to play with Gene for a long time,” says Heinen, “and I was really happy he wanted to join me.” And the bassist is Andrea di Biase, originally from Northern Italy. “Andrea is a very old friend and we know each other’s playing inside out, but that’s not why I chose him – it’s not easy to find a bassist who plays with such a deep sound, such lyricism and so in tune!” So Heinen consciously works to bring out di Biase’s melodic playing with the bow – he was classically trained in Milan – and as for Calderazzo’s playing, the phrases Heinen used seemed to speak volumes : “It’s all about ‘playing with intention’. Gene only plays what he really means.”

Heinen’s music consciously pays homage to classical precedents. The title of the album Out of Doors is also the name of a set of pieces by Bartók, but it is in fact a different set of Bartók pieces – or rather the method behind them – that is more directly in the background here. The opening track has a similarity in feel to the opening piece of Bartók’s “Eight Improvisations on Hungarian Peasant Songs”. What has Heinen been drawn to in them? “there is a lot of harmonic reference to Bartók’s use of polytonality, and of course the folk melodies that Bartók was using.”

Another aspect which links back to Bartók but also to a whole host of antecedents is Heinen’s interest in counterpoint. This has been a major area of study. His recently completed PhD at the Royal Northern College of Music had the title “Counterpoint in jazz piano with specific relation to the solo work of Fred Hersch.”

I was curious what above all was the element from his close study of (and with) Fred Hersch that he had found himself bringing home into his own work in the new album, the first to be recorded following the completion of the doctorate. It is that, in Heinen’s words, “Fred Hersch plays with the same aesthetic whether solo, duo or with the trio. He stays honest and within his own unique way of using inner voices, voice leading, time-feel etc…”

And how did that feed through? “I think when playing solo, I stopped worrying about being everything, being an orchestra filling all the space. Then from that, every time I got playing with a trio it felt more comfortable.” 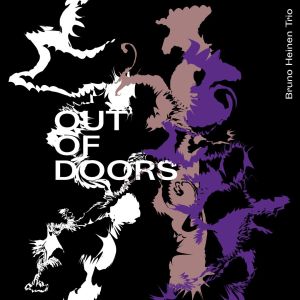 In a track Mirror, there is a clear demonstration of this as the trio gives way seamlessly to a solo piano episode and then resumes at the end of it. And a track like Fool in the Grave, what is impressive is the range from the large-scale public and orchestral pulling back to something intimate, even confessional.

That sense of continuity and flow across different moods and instrumental combinations and textures is a major feature of the album. Heinen talks of the eight tracks of the album as “movements” with a different concept behind each one, of how he thought a lot about the shape of each piece, and even refers to the symmetry of there being a “first half” and a “second half” to the album. And yet they are anything but through-composed : “Each movement consisted of just one page of material, but a lot of thought went into what was on each of those pages, as well as how they were notated”.

“We collectively decided that whoever wanted to move on, that was fine. We would just find our way through…and that evolved from playing together regularly.” As Heinen continued to explain the process of working with the trio, what came through increasingly was his sense of this trio being the right combination, and one that can bring a lot of joy: “The mixture of the two, Gene and Andrea, works really well for my music.” (pp)

Listen to Extracts from Out of Doors

Bruno Heinen’s thesis is available from the British Library

The Launch of Out of Doors was due to be at Kings Place on 5 June, part of an extensive Arts Council England-funded tour. We will update this post when plans become clearer.