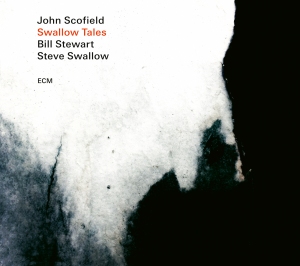 Going back to go forwards: US guitarist John Scofield’s new project returns to the Steve Swallow compositions that inspired his younger self in the late ’60s, and later when he was Swallow’s student at Berklee, Boston. Swallow was even on the first three albums that Scofield owned.

This is Scofield’s first ECM recording as leader, with Swallow himself on bass, and another long-term associate and friend Bill Stewart on drums. Stewart has worked with Scofield since the ’90s, and the sense of freedom and trust among the trio is palpable. The album was recorded in one day, but Scofield quips that “more than 40 years of preparation led up to it”. Both guitarist and bassist have mostly played electric instruments through their careers, as they do here.

Like Scofield’s ’80s trio albums with Swallow (and Adam Nussbaum), these tracks have a mixture of spaciousness, complexity, emotional pull and the sheer joy of playing. Scofield talks about “Swallow’s preference for circular”, and the tunes have an internal logic of their own.

The opening track, the waltz She Was Young, was originally the setting of a minimalist poem by Robert Creeley (recorded by Swallow with singer Sheila Jordan) and here without words it has a strongly lyrical quality. From the first few notes you can tell it’s Scofield, as always – his delicate or blues-rock-inflected bends, subtle distortion and exquisite timing.

Swallow has talked about gigging in the past with João Gilberto and being surprised by his “soft but emphatic” tone. The same phrase could equally apply to Swallow’s own playing. In the much-recorded Falling Grace the notes fall thick and fast as Stewart creates a richly-patterned carpet of up-swing under Scofield’s darting trills and octave bends. Scofield emphasises certain melody notes expressively, as if he’s hearing lyrics – it makes your heart lurch every time he reaches for the highest phrases. Portsmouth Figurations rushes into breakneck minor swing, every so often plunging into ringing root chords, earthing everything while the drums briefly break out. Scofield gets creative with the harmony while Swallow holds it together. There’s always been an element of rock in Scofield’s playing, and it’s thrilling here, as he bends all the notes of the dark, intense chords together.

If Legrand and Monk had co-written a tune, it might have sounded like Awful Coffee, where spiky intervals sometimes blur together like watercolours. Stewart keeps the impeccable shuffle swing groove, while Scofield ambushes us with hard-edged arpeggios and dense cluster chords with a rock crunch. You can hear every chord in Swallow’s melodic solo. As they relax into the extended coda, Scofield laces laid-back boppy phrases with distortion. An almost Count Basie-style ending dissolves into bittersweet chords.

Eiderdown was Swallow’s first composition, motifs reworked over ever-changing chords. In this speedy swing treatment (Scofield calls it “gritty”) Scofield’s solo tugs blues phrases out of shape, sometimes holding one note as a drone, and pulling another against it, like a Hammond. As he hits the strings harder, the distortion glows like a new colour. Stewart’s solo creates small miracles across the beat.

Swallow wrote Hullo Bolinas as a young man, on moving from New York to California. It’s a sweet slow waltz, undermined by twisting harmonies. Scofield is always a great communicator, and stretches out the emotion with country bends and vibrato, graceful swoops and darting triplets. Stewart holds back the end with striking cross-rhythms. The gentle ballad Away is also on Scofield’s 1996 acoustic album, Quiet. It could almost be a valedictory country tune – full of feeling, with its heartfelt vibrato and long slow notes. Cymbals shiver, the bass solo sings and the guitar solo takes its time as if calmly waiting for notes to arrive.

Beboppers took chord sequences from familiar tunes and wrote new, complex heads. For In F, Swallow takes the bones of Porter’s I Love You and reduces them to a handful of notes. Excitement and strong swing build as Stewart solos in the spaces between them. Scofield’s jazz chords splurge with rock energy. There’s a lot of fun in Scofield’s playing, especially on Radio. He describes it as “ridiculously hard to solo on, but I’ve known it for 40 plus years, so no excuses”. Swallow sometimes breaks up the time, then falls into full-on swing, delineating the chords in his short solo. Scofield always has something to say, and you’re on the edge of your seat waiting for the next surprise – he arcs gracefully round the chords, from quirky rock licks to scampering triplets. Stewart’s drumming combines tight grooves with highly creative sounds.

“I am searching for something new all the time,” Scofield told one interviewer. This album is a masterclass in the guitar trio – you can hear the past in the present. It’s also a completely engaging and immensely pleasurable album.