Markus Strothmann wears his heart on his sleeve, writes Rob Adams. The Hamburg-based drummer has had a love affair with Ireland since he first visited his mother’s birthplace, Westport in County Mayo as a child. His first album as a leader, Emerald is, as its name hints, partly a love song to a country for which he feels homesick when he’s not there.

The cover art of Emerald features an Irish lough and its surrounding mountains and the music, all composed by Markus with the exception of Danish saxophonist Fredrik Lundin’s Swaying Gently Sideways, often has strong overtones of Irish traditional music or carries an impression of Irish landscapes. As with many traditional Irish tunes, each composition has an accompanying story as Markus feels a background narrative can be important in helping an audience connect with the music in concert.

“We went to Westport every year when I was growing up and I’ve been back to Ireland many times as an adult,” says Markus. “I just felt a connection with the landscapes and although Irish music wasn’t maybe such a big part of that connection at the time, Westport is known for having a pub owned by Matt Molloy, of the Chieftains, so they were on my radar.”

Other Irish musicians, including the hugely influential Donal Lunny and flautist-whistle player Michael McGoldrick (especially his Farewell to Whalley Range), have come to figure in Markus’s listening and the way the Afro Celt Sound System fuse Irish music with West African traditions has influenced his own development as a composer.

Emerald also includes contributions from Markus’s brother, Andreas, and his aunt, Deirdre Quinn, who both wrote lyrics which are sung by Suzanne Savage, whom Markus met while playing a gig during a placement in Dublin while he was studying for his masters degree.

“There’s quite a strong family connection, really, because the opening part of the Irish Suite which follows the song Andreas and I co-wrote, Old Head, is a jig named after an ancestor of ours, Granuaile,” says Markus, whose Irish connection extends to keeping a spare drum kit in Irish trumpeter-broadcaster Linley Hamilton’s house should the possibility of a gig arise. “Granuaile, or Grace O’Malley, was a warrior queen in the sixteenth century, so it’s quite exciting to have a character like that in our family background.”

The family aspect extends to the musicians who appear on the album. Bassist Jonathan I. Cuñado, for instance, studied with Markus at ArtEZ Conservatory of Music in Enschede in Southern Holland, and the two ended up in Hamburg by coincidence, and the other players – Gary Husband (piano), Julian Elsesser (guitar) and Fiete Felsch (saxophone/flute) – bonded naturally during the recording. 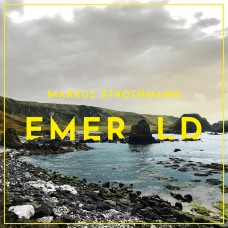 “I play piano well enough to compose but I wouldn’t consider myself a gigging pianist,” says Markus. “Fortunately, however, Fiete plays with the NDR Big Band here in Hamburg and he told me that Gary Husband would be coming over to guest with the band. Fiete helped me plan the album and he felt that Gary would be ideal. I felt the same but would Gary want to play my music? We met for dinner and Gary was incredibly encouraging. Of course, he’s a fantastic drummer as well as a pianist with his own distinctive signature. It was incredible to have him in the band and he was so friendly and inspiring.”

“I listened a lot to that album,” says Markus. “I particularly like the atmosphere he creates because I like to create impressionistic soundscapes with my music. While writing, I’d quite often sit down with a whiskey or a glass of Guinness and think of places I’ve been to in Ireland, although just as important as atmosphere for me is a story. I make a point of giving every tune a story that I can share with the audience on gigs. Of course, it might be some time before we can play the music on Emerald live, which is why I’m releasing it in digital form only for the moment. Then once we can do gigs again, I’ll press physical copies because I still feel that being able to take the music home on a CD is an important part of the relationship between musicians and their audience.”   (pp)

Emerald is released on Bandcamp and also available from Jazz Ireland