Since moving to London from Manchester in the 1980s, Martin France has become known as one of the very best British drummers of his generation, having performed with such great artists as Kenny Wheeler, Geoff Eales, Chris Laurence and John Surman, oftentimes on the celebrated ECM record label. Like many great drummers, although he has more than proved his worth in the world of jazz, he has also searched for inspiration further afield. In his band, Spin Marvel, France has explored groove-based sounds in the company of Nils Petter Molvaer, John Paul Jones and others, but in his latest collaboration, Krononaut, he has moved in a fresh direction. 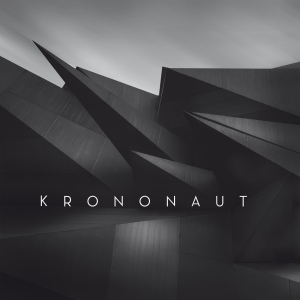 The self-titled album, Krononaut, is the fruit of two sessions that France recorded last year in London with the guitarist and producer Leo Abrahams, who is more familiarly known for his performances with Brian Eno, Jon Hopkins and Imogen Heap and for composing film soundtracks, often together with David Holmes. Abrahams does not consider himself a jazz guitarist, but he has nevertheless acquitted himself well to improvisation with France and Tim Harries, also from Spin Marvel, on bass. This first session was such a success, that Abrahams and France organised a second session, this time with one of Abrahams’ colleagues, the multi-instrumentalist Shahzad Ismaily, performing on bass. Additional help on the album comes from Arve Henriksen on trumpet and Matana Roberts on saxophone. Both are renowned for their experimental solo and small group work with electronics and composition: Henriksen on his many albums for Rune Grammofon and Roberts on her widely praised Coin Coin series of albums.

The sound that Abrahams and France play is described as ‘delicate’, ‘pointillistic’ and ‘often quite restless’ and this is the kind of experimental sound for which Henriksen and Roberts are both ideal collaborators. Like the paintings by founding pointillist Georges Seurat, the sounds the instruments make, particularly on the guitar, are like discrete notes that only when heard together in context make much of a melody. Abrahams has been greatly influenced by ‘madoh’, shamanic funeral music from Tajikistan, which no doubt came to his attention while working on The Crying Of Tanbur, a documentary about the civil war in that country. The music’s unique rhythms inform both the guitar and drums on this record.

The record label, tak:til, is the experimental branch of Glitterbeat records, and has become closely associated with Fourth World music: the forward-looking global approach to music pioneered by label-mate Jon Hassell in the 1970s and which influenced David Byrne and Brian Eno in their collaboration recording My Life In The Bush of Ghosts. This album is also explicitly influenced by the compositional techniques of New York avant-garde composer Morton Feldman who famously eschewed traditional harmony. It is the Fourth World influence in Henriksen’s trumpet playing on the opening bars of Jena, the first track on the album, but it is more Feldman’s influence that predominates the next few tracks such as Mob Kindu and Location 14. The third track, Leaving Alhambra, has a curiously off-kilter rhythm that is memorably described by Abrahams as ‘the score to Peter Strickland directing mid-period Elizabeth Taylor’. The first side of the album culminates in the relatively loud Power Law, in which France pounds his drumkit into submission.

The second side returns to a calmer mood with Cold Blood, the only track to be over-dubbed, where Henriksen’s spectral trumpet glides over the original trio composition. This mood continues on Visions of The Cross (featuring Henriksen’s ethereal vocalese) and then abruptly changes tack on Wealth of Nations in which Roberts’ saxophone blows over Abrahams’ atmospheric plucking and was rightly chosen as the single to promote the album in July this year. This collaboration between Roberts’ saxophone and Abrahams’ guitar continues in the angular Examen and the final track, Convocation, where there is a kind of tension between Abrahams’ underlying conception of a television soundtrack and the delicate lines of the saxophone.

Although this album was the result of an improvised session with a guitarist who claims that he ‘can’t play jazz’, if there is a genre to which the music belongs then it is more jazz than any other, primarily because the music achieves that balance of freedom and structure to which the best jazz always aspires. Not only is it worth listening to in relation to the contrasting discographies of Abrahams and France, it is also one for those fascinated by the masterful improvisational styles of Arve Henriksen and Matana Roberts.