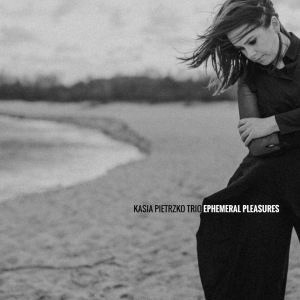 Polish pianist Kasia Pietrzko gave a copy of her debut album Forthright Stories to Tomasz Stańko. To her great delight, he listened and asked her to play a gig with him on Valentine’s Day 2018 in Kraków. They planned a European tour for the coming months which did not come to pass. After Stańko’s death later that year, Pietrzko was deeply affected and felt unable to compose for a year. But then came the outpouring of creativity that is Ephemeral Pleasures, propelled by her experience with Stańko.

The album is a mix of original compositions and improvised tracks entitled Episodes, five of each. Pietrzko’s compositions are graceful and highly emotive, and she has a gift for unforced and memorable lyricism, something she probably absorbed from studying and then working with Stańko and perhaps her classical studies of Prokofiev. In the opening track Ephemeral Pleasures there is a sense of joyous freedom and abandon which rapidly evaporates into a sombre internal examination of that joy, and then a revival of hope towards the end, these emotions a microcosm of the whole album. T.S. (referencing Tomasz Stańko) is a delicate but robust piece, Pietrzko conveys volume without actually using it by virtue of the passion in her playing. The improvisations provide spacious and dark abstract pauses sandwiched between the intense, emotional compositions, none more so than Episode II, an extraordinary solo piece by Andrzej Święs of thrilling edgy bowing.

She has the same drummer, Piotr Budniak, as on her earlier album and a new bass player Andrzej Święs. Her band members have pedigree – amongst many awards Budniak won the Second Prize at Jazz Juniors Kraków in 2006 with his own band when he was just 15, and Święs won second prize at the same competition in 2004 and has worked with Lee Konitz. Pietrzko is herself a prize winner of Jazz Juniors, a tribute to its capacity in building a strong domestic jazz scene. Add this depth of experience to her own extraordinary accomplishments and you have a cohesive band and an album of great emotional intensity.

Everything about this album is impeccable and that isn’t by chance, it’s by design. It was recorded at Monochrom Studio, Poland, taking full advantage of the 1978 Yamaha C7 piano and the performances no doubt inspired by the remote location and the spacious views from the windows of the acoustic space created by Masami “Sam” Toyoshima, the Japanese acoustician of beautiful recording spaces which include Metropolis in London. The album was mixed and mastered by Magdalena Piotrowska who was mentored by Mandy Parnell (Aphex Twin, Bjork) at Piotrowska’s studio Hear Candy.

Pietrzko probably has as much reason as anyone else to feel the loss of opportunity that the Covid-19 pandemic has caused to her career: she was due to showcase at Jazzahead! in April 2020 – with all the openings that would bring – and build on her participation in 12 Points in 2019. But the showcase is only postponed until next year, and we can hope that the pandemic will be ephemeral, unlike the lasting pleasures of listening to this beautiful album. As Aaron Parks has written in the liner note, “[Kasia Pietrzko’s] approach to the piano is at once patient, inquisitive, bold, and filled with the sense of unforced discovery that marks true creative vision.”