Andrew Willox and Eileen Mann – ‘I Think We Have a Find: A Biography of Roy Willox’

Andrew Willox and Eileen Mann – I Think We Have a Find: A Biography of Roy Willox
(Self-published, 2020. Review by Simon Spillett) 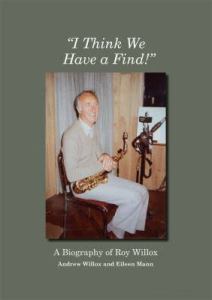 Biographies of musicians – of any style – have a marked tendency to play up the lurid and the sensational. After all, controversy sells. Just ask any tabloid editor. What then are we to make of a musical life story that is littered not with attention-grabbing high-jinks, endless tales of substance abuse and forensically detailed accounts of wild debauchery but with sober words like ‘professionalism’, ‘modesty’ and ‘discipline’. Indeed, this even begs the question whether you can actually create a book centred upon such things? Or moreover, whether such a book might get lost in the shuffle of hyped-up celeb biographies and the like, however deserving its subject.

In intent I Think We Have a Find is a lovingly assembled ‘tribute’ to the late Roy Willox, a multi-reed playing musician who was a mainstay of the British big band and recording session world for an incredible 70-plus years up until his death in late 2019. Collated by Willox’s son Andrew and close family friend Eileen Mann, it’s actually less ‘biography’ than an informal collection of anecdotes, press clippings, candid photographs and assorted memorabilia; a sort of scrapbook not only of Willox’s life but of a whole era of music-making that is fast disappearing into the rear-view mirror of history.

Some of the source material is taken from existing work, some from direct interviews with those who knew and worked with the saxophonist, and if the production values and text won’t win prizes for either logic or grammatical flow it matters not. This is not a book to be nit-picked at, literary critic-style.

In some senses, Willox emerges from its pages an sort of Everyman of the musical world through which he walked all his adult life – he played on literally thousands of recordings with everyone from Benny Goodman to Benny Hill. However, what lifts him above many other such players was, ironically, the very same thing that might have made him appear a tad anonymous to the uninformed.

The session scene, as anyone with only a small insight into its politicised machinations can tell you, could be a merciless mistress. Its cast includes gate guards, bullies, hard-as-nail ‘characters’ and more than a share of big heads. Willox was none of these. In fact, the recollection of another sessioner, the guitarist Mitch Dalton – “he never displayed any ego, was conscientious and super-reliable” – seems the perfect summary for a player legendary for never making a mistake, musical or otherwise.

Willox also never made an enemy. Young players and old hands were treated as equals (a rare stance among a generation that were often needlessly wary of new blood) – provided they were made of the right stuff, naturally. He wasn’t above making the occasional criticism though, these knowing observations informed by decades of operating at the very highest level.

It even earned him a nickname, bestowed on him by the wild-haired trumpeter Stan Roderick, another one-time session king: The Policeman, which got corrupted into the Village Policeman and eventually the Village Bobby. Although a tailor made-fit for Willox’ dour, unemotional mien, the moniker actually referred to his knack of tactfully handling things when they got out of hand. Sloppy playing would be dealt with quietly and without ceremony and he would discreetly offer titbits of fatherly-styled advise to newbies who were living it a little too large. “Far too much, far too soon,” was his gentle prick of the conscience delivered to one young player.

Nor would he stand for any disrespect of those he knew had given greatly to the music. In the late 1960s, it was fashionable for a new breed of young players to ridicule his former boss, the industry titan Ted Heath, not simply because Heath was artistically old-hat but because he was visibly gripped by mental decline. Willox would have none of it. “I never heard him say a bad word about other musicians,” observes fellow saxophonist Pete Ripper, a reminder of Willox’s gentlemanly, old-school codes of conduct.

In his dotage, Roy Willox was much loved and treasured, garnering another witty handle, ‘Cannonball Elderly’, and seeing out his musical days playing in several parochial big bands that had far less starry prospects than those in which he’d made his name. This mattered not. All that counted was doing a good job, whatever the setting.

And it is the sheer variety of these settings that is perhaps the most impressive aspect of this book. Chronologically, Willox bestrides an enormous swathe of jazz and popular-music culture in the UK. He began his career in his teens after lessons with a man who was in many ways his musical forefather, the great altoist Harry Hayes, whose assessment of Willox the boy-wonder saxophonist provides the book with its title. From then on there were significant stays in several of the major working dance bands of the post-war era – Ted Heath, Geraldo, Jack Parnell, the BBC Revue Orchestra – and, as he’d recall with delight, that of one pre-war giant, Henry Hall.

Added to this his ‘session’ work was a far-ranging as it comes – playing on recordings by everyone from Frank Sinatra to Kate Bush, and – retro UK culture vultures, please note – on the soundtracks to TV shows including Thunderbirds, That Was The Week That Was, Dr Who and Last of The Summer Wine. Willox’s faultless executive skills in these ‘time-is-money’ pressured studio conditions were legendary. Not for nothing did Hollywood score legend John Williams ask for him by name when assembling the orchestra to record the Harry Potter movie soundtracks, a rare honour in the sometimes unseen and anonymous world of film music. The words of one of those who contracted Roy to play on his albums – Larry Page – are an apposite summary of his abilities in this discipline. “He will be reading a newspaper while you’re counting in, and the minute you count in he’ll blow. He’s one of the very few people who can do it.”

Page wasn’t offering glad-handing praise. Indeed, this is a book full of such testimony – from fellow sessioneers like Tony Fisher, Pete Ripper, Pete Long and Dave Bishop, to name only a few.

But what does it reveal of exactly how Willox reached this level of excellence? The answer is very little, although this is through no fault of the co-authors. Willox it seems was a man of few words where his own playing was concerned. In one telling passage, Pete Long recalls a conversation in which the older man told him music was “something he could always do”, a statement that is evidently as factually accurate as it is succinct. And although he was by no means immune from the plague of self-doubt that spares no musician of any worth (“I was never my greatest admirer – I couldn’t listen to myself”) he’d always prided himself on his ability. One of the book’s most delightful moments comes when the school-aged Willox is being upbraided by an especially censorious teacher, offering caution on the fiscal vagaries of life with the local dance band. “I’ll be earning more in my first week than you do now,” came the young saxophonist’s reply.

As someone who’s long appreciated Roy Willox’s skills as a jazz alto saxophonist it’s perhaps a shade disappointing to find so little in the book about this side of his world-class talents. However, it is noted that Tubby Hayes once offered a lovely compliment to Willox, saying he “should have been a jazz player”. What Hayes meant, I suspect, is that a player able to ‘turn on’ such improvisational creativity, as indeed Hayes himself could, shouldn’t have allowed the studio to be his sole musical outlet. Late in life, Willox did venture out into the jazz scene per se, as a member of the ‘Best of British Jazz’ outfit featuring fellow session luminaries trumpeter Kenny Baker and trombonist Don Lusher. “They think I can play a bit,” was the altoist’s own characteristically modest assessment as to why he’d been chosen for the role.

A sample discography at the close of the book give more than ample evidence of the catholic breadth of Willox’s recorded legacy, although much of his finest work went unaccredited (pick up virtually anything recorded at West Hampstead’s Decca Studios in the 1960s – with artists ranging from Caterina Valente to Johnny Keating -– and you can bet your life that those soaring alto solos belong to RW). Asked to pick his own favourite among this colossal oeuvre Willox picked a piece with the Larry Page Orchestra. The track that several others single out within the book, though, is Eloquence, a Keating-penned feature from his days with Ted Heath. In many ways, this performance is a summary of Willox both as a musician and a man: immaculate, contained, full of attention to detail, modestly presented by utterly convincing. Eloquent indeed.

And it’s these qualities that colour the pages of this book, an unashamedly nostalgic parcel of Polaroids, professionalism and past times. The rear jacket précis pulls no punches in its aim to “explain to a younger generation just how busy, demanding, inspiring and sometimes brutal” was the life of musicians of Willox’s school. In fact, one of the victories this book scores is especially timely. The authors freely admit that it was a product of the recent ‘lockdown’ prompted by the COVID-19 crisis and arriving via this stimulus, and at a time when the societal and cultural role of musicians has never been more hotly debated, it is a reminder of how so much of what we take for granted – soundtrack music for film and TV, albums by big stars with orchestral accompaniment, even things like Strictly Come Dancing – are both unthinkable and moreover untenable without instrumentalists of the same executive skill level as Roy Willox. He’d certainly have had a thing or two to say about ‘viability’.

An exemplar of his craft, modest and very human, Willox himself emerges from these pages as a man of genuine substance. Once, when asked what he might have been had he not been a musician, he replied that he’d have enjoyed being a groundskeeper. Indeed, one can almost imagine him as such, keeping borders trim and autumnal leaves neatly swept, in much the same way he made orderly work of the constant demands of the manuscript set before him. But as this book makes clear, Roy Willox was born to play music and play it at the very highest level.

I Think We Have A Find: A Biography of Roy Willox by Andrew Willox and Eileen Mann is available directly from its authors. Email [awillox] at [skymesh] dot [com] dot [au]