The Royal Bopsters – ‘Party Of Four’ 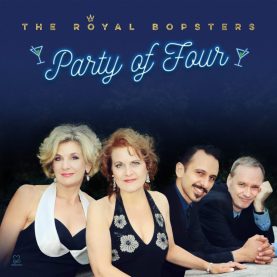 If you’re allergic to vocalese, stop. Sorry about that, but you’ve arrived at the wrong review. On the other hand, if you’re a vocalese virgin eager to lose your innocence, vocalese is the arcane art of grafting a verbal story onto a specific solo by a jazz musician (think of Eddie Jefferson’s Moody’s Mood For Love, “There I go, there I go…” based on James Moody’s alto solo on I’m In The Mood For Love). Creating appropriate vocalese lyrics moves well beyond scat and is about as easy as juggling spiny cacti while walking a tightrope blindfolded. And backwards. Jon Hendricks was the consummate master. Annie Ross was certainly no slouch (‘Twisted’ was written overnight to fit a Wardell Gray solo). And Georgie Fame has shown a lot of talent too. If you think that writing vocalese is hard, performing it requires extraordinarily gymnastic vocal skills and range.

Party Of Four by The Royal Bopsters has four (sadly, now three. Alto Holli Ross, to whom the album is dedicated, died this year) voices projecting vocalese in the tight, intricate harmony style pioneered by combinations like the Mills Brothers, Meltones, Hi-Lo’s, Double Six and Four Freshmen. The album is dramatic, multi-layered and full of intimate, shifting, four-part harmonies drawing eclectic inspiration from (and paying due homage to) many masters of the jazz tradition. Example: on the opening track not only does the group execute a neat routine on George and Ira Gershwin’s But Not For Me, but Holli Ross also inserts a solo chorus based on a Chet Baker 1979 scat vocal.

New York’s busiest bass player, Christian McBride, joins the Bopsters on Tadd Dameron’s impressionistic On A Misty Night, which includes a Georgie Fame vocal line (taken from his scandalously under-appreciated album, Poet In New York), which, in turn, is based on a Chet Baker solo taken from his album, Boppin. Did I mention anything about the album being heavy on homage?

For How I Love You (Let Me Count The Reasons), The Royal Bopsters’ bass voice, Dylan Pramuk, composed lyrics dedicated to his new bride by marrying a couple of unlikely sources: Dexter Gordon’s 1970 solo on I Love You For Sentimental Reasons and Elizabeth Barrett Browning’s Sonnet 43.

On Lucky To Be Me from On The Town by Leonard Bernstein, Betty Comden and Adolph Green, the Bopsters are joined by 91-year old singer Sheila Jordan (whom Charlie Parker, no less, described as having “million dollar ears”). Arranger Pramuk also brings to the party a half-chorus of vocalese based on a piano solo by Bill Evans.

Steve Schmidt, previously accompanist to singer Mark Murphy, is the album’s hardworking pianist and contributes a thoughtful Why’d You Do Me The Way You Did?, which he co-wrote with the late singer. This version gathers an additional chorus by Bopster soprano, Amy London.

In an inspired move, Billy Strayhorn’s majestic ballad Daydream receives the full sumptuous a cappella treatment. Voices only. Faultless intonation. Sensitive dynamics. Subtle internal harmonic shifts. And so gloriously performed that the hairs on the back of your neck stand up and salute.

The Bopsters are re-joined by Christian McBride who lays down a groovy Latin pulse for Tito Puente’s Cuando Te Vea (When I See You), with lyrics added by Holli Ross. Pete McGuinness, who also happens to be a pro trombonist, contributes a witty chorus of ‘mouth trombone’.

On Baby, You Should Know It, yet another guest, singer and songwriter Bob Dorough, joins (for what is, poignantly, almost his swan song) growling one of his own pieces in his deeply-creased voice, marinaded in blues, against Bopster backing. It swings and the coda preserves the dirtiest laugh on record.

Our Spring Song is an original by two Bopsters: McGuinness and London. Ms London wrote the lyrics welcoming the new season during a walk in the park after a long, dispiriting winter. Nice piano playing by Schmidt.

Though it was first introduced by R&B Meister Louis Jordan in 1942, this version of J. Mayo Williams’ Rusty Dusty Blues is an unashamed homage to the Count Basie version, the lyric genius of Jon Hendricks (a.k.a. ‘the poet laureate of jazz’) and his timeless group, Lambert Hendricks and Ross, who recreated Basie hits with voices.

Finally, My Shining Hour, by Harold Arlen and Johnny Mercer, usually performed at a stately pace, accelerates up-tempo offering everyone an opportunity to strut their stuff. Dave Kowalski, who supervised and mixed the session, deserves our admiration and gratitude for the lifelike presence and luscious sound (an excuse to reprise Daydream yet again).