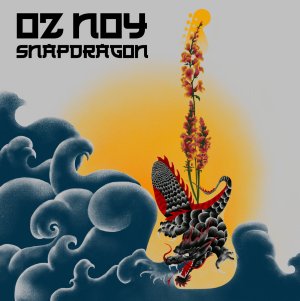 I first saw the Israeli-born and New York-based guitarist Oz Noy play when he was a member of the great Cameroonian bassist Richard Bona’s remarkable live band two decades ago. He was already an impressive player and has developed into something special as his latest album clearly shows.

Noy has tone, technique and timing, he can shred with the best of them and is always firmly rooted in the groove. What makes his playing and arranging stand out is his knack of adding an unexpected or edgy twist to a chord voicing or phrase that gives his playing its own distinct personality. The CD cover lists what kind of guitar he’s playing on each track – a Stratocaster, Telecaster or Les Paul – which is a nice touch for the growing guitar playing community he’s cultivated through his series of instructional video releases and guitar magazine contributions.

The original compositions are catchy with a strong bop accent present in many of them, such as the fast unison lines of guitar and Sneider’s trumpet on Looni Tooni set over an infectious contemporary funk groove driven by Chambers. It’s also apparent in the Sidewinder opening feel of Boom Boo Boom featuring the Wurlitzer of Kikoski. I liked the octaves in the hard rocking Groovin’ Grant with Rogers and the twisted feel of Tired But Wired, which features a terrific solo from Potter. There’s also the gorgeous funky shuffle of Outer Look, which has a wonderful Roney solo. Of the three non-original compositions, Monk’s Bemsha Swing and Evidence are nicely reworked, as is Rod Argent’s Zombies hit She’s Not There. Noy’s solos on all the tracks are killers and when he tones things down he still plays with the same level of intensity and passion.

There’s so much good playing on this album it takes a strong personality to shine through and Oz Noy’s very much the main man here. One to play loud and blow the lockdown blues away.