One of the great curiosities about jazz is the way that the popular portion of its repertoire often seems to stop in about 1959, just as a new breed of popular song was fast emerging. A goodly portion of jazz is built on the ‘Great American Songbook’ that came from musical hits and misses from the 1920s onwards. That 1959 cut-off date is the year The Sound of Music hit the stage with, ironically, one song from it being taken by John Coltrane and used to push jazz in an entirely new direction. But even if the compositions of Chuck Berry, Buddy Holly, Little Richard et al were too brief and simplistic to provide a platform for jazz improvisation, it seems a little odd that the regular jazz repertoire has never quite extended to say, Burt Bacharach, Brian Wilson, or beyond. 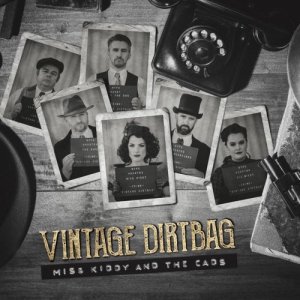 Miss Kiddy and The Cads have addressed that chasmic divide head on. Their approach is novel but not completely original. Fifteen years ago the pop-singer Paul Anka (lyricist of ‘My Way’ amongst others), released ‘Rock Swings’ a classy and surprisingly enjoyable jazz Big Band outing of well-known tunes by Bon Jovi, Nirvana, Oasis, Spandau Ballet and Lionel Richie amongst others. A little later, Bryan Ferry did something similar with the Roxy Music repertoire. And I cannot continue without the briefest mention of Tim Whitehead’s periodic excellent reworkings of rock-pop classics like ‘What’s Going On’ and ‘My Girl’. And there is Postmodern Jukebox…But those are largely the exceptions.

Miss Kiddy’s ‘Vintage Dirtbag’ takes Anka’s innovation backwards and forwards at one and the same time. On the one hand she takes the music back to the roaring twenties and on the other hand, the tunes she sings are from the 90s and beyond, some of which are well past my bedtime. So, we get Chicago-styled renditions of The Spice Girls’ ‘Wannabee’. Cher’s heavily auto-tuned ‘Believe’ gets heard ‘au naturel’ (with a Coronation Street trumpet intro) and tunes by David Bowie (‘Let’s Dance’), Beyonce (‘Crazy In Love’) and Blur (‘Song2’) all get enthusiastically dragged back to the 1920s replete with stop-time, stride, jungle drums and tap dance.

It is all stylishly done with lots of very tight and well-conceived arrangements. The band are excellent, especially trumpeter Ben Cummings who provides screaming high notes, smears and slurs in abundance and all well placed.
Leah Wise’s tap dancing complements Andrew (Daddy Beats) Jones’ drums  – but that element is obviously more significant live than on CD. Pianist Ross Power has the essential mix of romance and swing that characterised that era’s music. And at the heart of this, Miss Kiddy herself (Abi Gilchrist when not in costume), has a pleasing voice. It perhaps lacks a touch of gospel rasp and growl, but that may be different live too.

If there is one minor triumph on this CD, it is the rendition of ‘Place Your Hands’ by the British indy band Reef. Miss Kiddy and crew have turned this into a mini-gospelised triumph which, live, I can imagine being a right old romp.

Some might class Miss Kiddy and The Cads as cabaret as much as jazz. But it’s stylishly done, involving a high degree of skill. And it’s fun too. If this came up on a Spotify playlist or on random shuffle, you’d probably enjoy it. And there is sufficient imagination and just enough variety for it to work as a whole CD.

In the last 20 years or so we have seen a shift from a purely aural age to an audio-visual age, especially when it comes to entertainment. In that sense this is not really a CD. It is a souvenir. And maybe many CDs are now really souvenirs. But with a band as visually striking and energetic as this, the ‘Vintage Dirtbag’ CD inevitably pales in contrast to the band’s entertaining You Tube videos. That said, your Granny would probably love this and it’d make a classy family stocking filler.

Afterword:
Most of this CD review was written before Coronavirus and lockdown. In the light of that, if you want to recreate the atmosphere of a live gig in your living room, this might be just the CD to do that.

LINK: Miss Kiddy and the Cads are fundraising for the NHS United Charities through their streamed Kitchen Disco performances