Pianist/arranger Frank Toms, who passed away last Wednesday 27 January at the age of 83 at home in Penn in Buckinghamshire, invariably brought levity, a positive and encouraging spirit, and what Derek Nash describes as an ever-present “twinkle” in his eye to the music and to his fellow musicians. Saxophonist Simon Spillett traces his long career and pays tribute to a very popular figure in British jazz circles. Originally from Manchester, he was to make his mark “in the rolling hills of rural Buckinghamshire, of all places, rather than in Soho’s metropolitan jazz core,” as Simon Spillett writes. In sadness and fond memory: Jazz in the UK survives and thrives as much because of unsung heroes as it does the better-known names. The passing of pianist Frank Toms last Wednesday, in his early eighties and following an on-off struggle with serious cardiac issues, marks the loss of one such player.

2020’s list of national jazz casualties included three prominent members of Britain’s post-bop top tier; Don Weller, Peter King and Ron Mathewson, each feted in death as the world-renown individuals they indisputably were. It’s no secret that theirs was a generation rich in jazz ambition, full of war-babies who’d grown up to become fascinated by the heady thrills of 1950s modern jazz.

Frank Toms was another from this wave. His profile may have been lower, yet he was equally passionate about the music he played, sharing a similar background. Indeed, if it’s possible to take the example of one individual and use it as an allegory for the experiences of an entire swathe of young, eager post-war English jazzmen, then Toms’ early life is as good as any.

Since the 1970s he had been an adopted ‘southerner’, a face familiar to many from his long-running residency at various incarnations of the Marlow Jazz Club or from his membership of London saxophonist Willie Garnett’s big band (Toms can be heard on their eponymously-titled 1999 album on the Music Choice label).

However, Toms begun life – and his love of jazz – firmly a northerner, apprenticing his piano skills on the rich Manchester jazz scene of the early 1960s.

The city was already well-furnished with local keyboard talent – Joe Palin and Eric Ferguson, to pick just two names of note – but the young Toms was soon hot on their heels.

Playing with various other newbies such as future Ronnie Scott’s solicitor Wally Houser – also a good friend of LJN – , and the man later destined to become the Evening Standard’s jazz critic, Jack Massarik – both then enthusiastic young alto saxophonists – and drummer Hughie Flint, later of rock god fame in the band McGuiness Flint) he was a regular at such long-forgotten venues as the Reno, the Left Wing and the York Club, essaying the latest line in hard bop classics, all learned the hard way, of course – by ear. 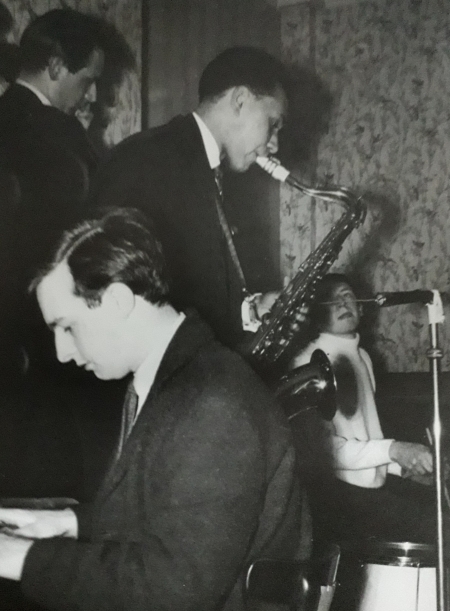 Bill Birch’s masterly study of the Manchester jazz scene at this time – Keeper of The Flame (2010) – contains a couple of photographs of the tender-faced twenty-something Toms in these settings, alongside two other prominent Mancunians, tenorist Julius Hasford and trumpeter John Rowland, both of whom were members of his first ever band. Another key associate at this point was Paul Bridge, who was to become Humphey Lyttelton’s bassist of choice in the 1980s.

By the early 1970s, though, Toms had come south and was making in-roads into the London jazz scene, forming a mid-sized band with several up and coming young soloists including the trumpeter Dick Pearce. In 1971 he realised the ambition of many of his musical ilk in bagging a BBC ‘Jazz Club’ broadcast – a major coup for a new outfit – his group sharing the programme with the band of Karl Jenkins. They also worked under the auspices of the recently formed Jazz Centre Society, playing gigs in various venues sponsored by the JCS, both in the capital and dotted about its commuter belt.

And it was here, in the rolling hills of rural Buckinghamshire of all places, rather than in Soho’s metropolitan jazz core, that Toms was to truly make his mark. When the Chiltern Jazz Appreciation Society moved its regular gig night to the Clayton Arms in Marlow during the height of the celebrated ‘hot summer’ of 1976, Toms was installed as their house pianist, leading a trio that initially included bassist Tony Moore and drummer Nigel Morris. It was a role he was to occupy up until the current pandemic halted the club’s activities last year.

What became known generically as ‘Marlow Jazz Club’ moved venue a staggering eleven times over the next forty or so years, even for a time taking up residence in the Wooburn Grange Country Club in nearby Bourne End, familiar to millions of TV viewers worldwide as the exterior location for the iconic BBC sit-com ‘Fawlty Towers.’

The only fixture that truly survived these peregrinations was Toms, the gig affording him the opportunity to work with a veritable A-Z of jazz, both national and international. American guest stars like Sonny Stitt and Al Cohn were popular visitors, as were leading British luminaries like Don Rendell, Peter King, Jim Mullen and Bobby Wellins. And, as the generations moved on, in the 1990s Toms found himself sharing the stage with young lions like Gerard Presencer, Derek Nash and Anthony Kerr. Later still, he’d often be joined in the rhythm section by his son Elliot, a gifted drummer.

The MJC’s organiser, Michael Eagleton, a friend throughout the club’s existence, remembers Toms as ‘much appreciated [by] some big names’ with the pianist’s own pick of these many memorable nights being ‘two gigs with the legendary Harry ‘Sweets’ Edison.’

Toms’ own favourite of the many guests he worked with was American-in-London Jean Toussaint, the ex-Jazz Messengers tenorist whose gigs at Marlow never failed to draw a crowd, or moreover, a provocative performance from his accompanist.

However, no matter who was out front – be it Kenny Davern or Vasilis Xenopoulos, veteran or newcomer – Toms’ unfailingly delivered his own particular brand of backing. Indeed, as any guest who worked the club can attest (this writer included), the moment he laid his fingers on the keys you could tell where his stylistic preferences lay. Watching him play – mouth often agape, his bobbing head following his fingers – there was no doubting his love of the bebop inventions of Bud Powell and co., as demonstrated in his frequent inclusion of the descending shout chorus chords of Dizzy Gillespie’s ‘Two Bass Hit’ as a sort of musical signature if playing a twelve-bar blues. He was no slouch at other styles too and would happily sight-read anything set before him, his face betraying delight at, say, Benn Clatworthy’s ingenious reharmonisations of well-known standards.

The gig could also bring out his playful side. One night at the Cross Keys, a noisy town centre pub that was Marlow Jazz Club’s home for a few years in the 1990s, Bobby Wellins was completing a unashamedly lyrical unaccompanied cadenza on a ballad, and having done the impossible in quietening the room, suddenly found his final notes cut into by Frank standing bolt upright at the piano, flinging his arms outwards and pleading ‘Bobby! Marry me!’

Another legendary British jazz tenor saxophonist Art Themen was also a regular at Marlow, although these gigs were by no means his introduction to Toms. The two men were contemporaries in Manchester in the early 1960s, but as he remembers, despite the parity in age, they occupied quite differing stages of jazz development.

‘Frank sort of sprang from the womb straight into Bud Powell,’ he says, ‘while I was still the ‘mouldy fig’ trad clarinettist. He was one of those players who just came in at that harmonic level, able to understand bebop.’

Themen also recalls a story then doing the rounds in the city’s jazz circles, that the living room of Toms’ modest two-up two down was entirely occupied by a grand piano.

When the two men’s paths crossed years later, Themen wasn’t at all surprised. ‘It’s often how it goes; you know of someone playing really well somewhere and they suddenly turn up again somewhere else. We didn’t really know each other that well in Manchester but I think I must have played with Frank dozens of times at Marlow [Jazz Club] over the years.’

Another of the club’s guests supports Themen’s memory of Toms’ obvious desire to dig in on a gig.

‘It was always great fun to play with him,’ remembers saxophonist Derek Nash, who spoke fondly of the ‘twinkle’ in the pianist’s eyes if there were some little creative amusement and of his ‘great musical support.’ 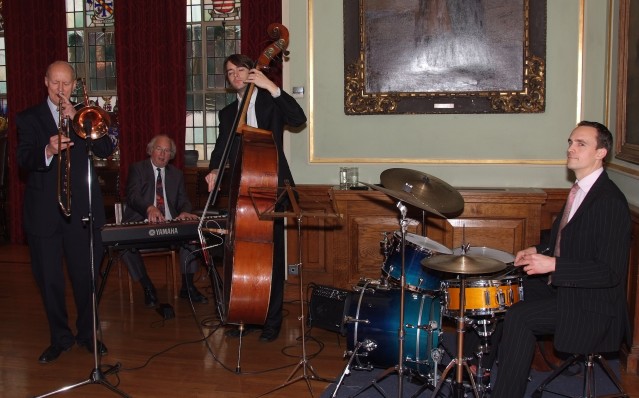 He continued playing regularly right up to lockdown last year, in both small and big band settings. Trombonist Andrew Butcher says “I met Frank through his son Elliot, our sextet’s long time drummer, since when Frank has been a regular stand-in on piano, as well as working with me in The Barnes Big Band and with Willie Garnett’s band. He is always creative, he is an empowering player to play with and he has an infectious enthusiasm for the music. Even through lockdown he has been on the phone discussing new arrangements he is writing for the band and continuing to offer me the musical insights and encouragement that made him such a good teacher throughout his life.”

Toms’ final musical project under his own name was also realised through the patronage of Michael Eagleton, who presented the pianist’s new ten piece band – Conkers – at Marlow in summer 2018. Featuring saxophonist Karen Sharp and trumpeter Steve Waterman, and with all the arrangements penned by the leader, the only thing that seemed questionable was the title.

With that pithy encapsulation you have Toms’ philosophy in a nutshell: finding new ways into the kernel of jazz, seeking out the seed of new harmonic ideas, just as his bop idols had once done.

‘He’ll be much missed,’ says his long-time ‘employer’ and old friend Eagleton. Indeed, without him one part of our parochial jazz landscape won’t ever seem quite the same again. 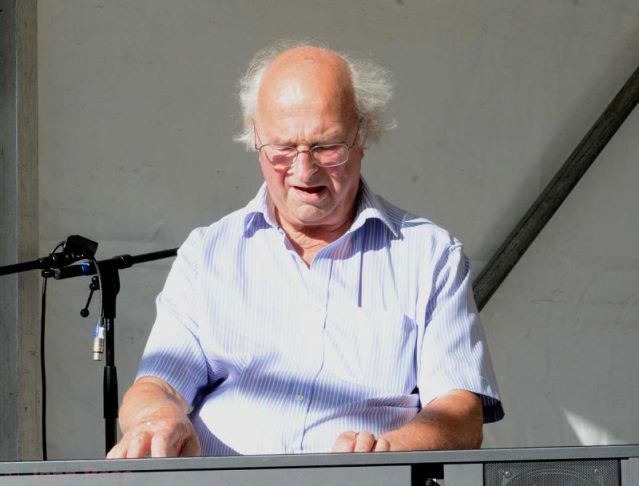 With thanks to Simon Spillett and Andrew Butcher